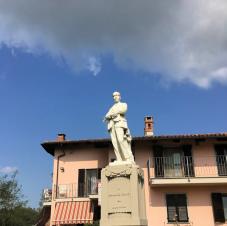 On 6th May, we celebrate St Dominic Savio, a pupil of Don Bosco who impressed and inspired all he met during his short life. In this extract from the biography he wrote, Don Bosco describes Dominic's devotion to Our Lady, and his special joy in this during the month of May:

His devotion to Our Blessed Lady was like a burning fire within him. It was therefore a natural development that he should be carried away with special fervour during the month of May. There were always extra services in the church for the benefit of the public, and the boys took part in them. But Dominic was not satisfied with that. He arranged with certain companions to perform extra devotions every day, and he prepared a stock of examples and anecdotes concerning the devotion to Our Lady; with the aid of these he urged not a few boys to make an effort to celebrate the month with fervour. Needless to say, he received Holy Communion every day during that period and was a shining example to all those that came in contact with him.

A little incident is told in connection with this month. It was proposed by someone that a little altar should be erected in the dormitory to which Dominic belonged, and a collection was made all round for contributions towards its expense. Savio found himself among the number of boys who had no pocket money at the time; yet it was not to be thought of that he should be out of the contribution to so good a cause. He soon conceived a plan. He had among his books one that was of some value, which he had received as a prize. He proposed that this should be sold and the proceeds given to the altar. Others thought they would adopt the same plan; they accordingly got together a few of their things that might be desirable in the eyes of companions, and arranged to have a sort of lottery. Purchasers were soon found, and the result was ample for the decoration of the altar. Its adornment was to be done after night-prayers, by special permission, but Dominic was expressly advised to go to bed, as he had not been well of late; he obeyed, but it was quite a sacrifice for him to be deprived of doing something that he thought tended directly to the honour of her, of whom he was one of the most devout clients.

From: Life of Dominic Savio by Don Bosco

Learn more about St Dominic Savio on the link below.

Image: Statue of Dominic Savio outside his family home in Mondiono, Asti, where he died on 9 May 1857.