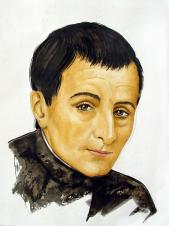 Joseph Cafasso, a fellow citizen of Don Bosco, was born at Castelnuovo d'Asti on 15 January 1811. After his priestly ordination in 1833, he entered the Ecclesiastical College of Turin where he remained for the rest of his life. He combined the work of the teaching of moral theology and the formation of priests with the ministry of the confessional and the service of pastoral charity to the poor, and particularly to prisoners and those condemned to death. He was of great material and spiritual help to Don Bosco at the beginning of the latter's priestly work, and was his spiritual guide from 1841 to 1860, supporting and defending him by his moral authority. He died on 23 June 1860 at the age of 49. At his funeral Don Bosco described him as a model of priestly life, teacher of the clergy, outstanding counsellor, consoler of the sick, comforter of the dying and friend of everyone. Pius XII declared him a saint on 23 June 1947.