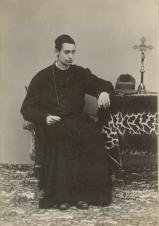 Today marks the feast day of Blessed August Czartoryski. August was born in exile, in Paris, after his parents were moved to there by Russians.

August suffered with Tuberculosis for most of his life and it was an issue for Don Bosco, as he was cautious about him joining the Salesians. But Pope Leo XIII settled those doubts, and made sure that Don Bosco accepted August into the Society.

August came from a very rich and noble family, and his family, didn't support his decision to join the priesthood. But August was adamant that he would become a priest and renounced everything to the Salesians.