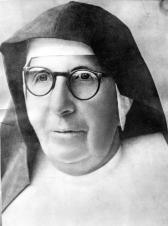 Today is the feast day of Blessed Maria Troncatti.

Troncatti was born in Corteno Golgi, in the province of Brescia, on 16 February 1883 to a large family of mountain farmers. She grew up happy and hard-working among the fields and the care of her siblings, in a warm atmosphere of parental affection. The Salesian Bulletin came to Corteno and Mary, rich in Christian values, began thinking of a religious vocation. Initially her father disagreed but as soon as his daughter was of legal age, 21, he gave his consent. Mary asked to be admitted to the Institute of the Daughters of Mary Help of Christians and made her first profession in 1908 at Nizza Monferrato.

During the First World War she attended health care courses in Varazze and worked as a Red Cross nurse in the military hospital. Following a violent storm, Maria promised Our Lady that if he saved her life, she would leave for the missions. Our Lady saved her and Sister Maria asked Mother General if she could go among the lepers. Seven years later, Mother Caterina Daghero sent her to Ecuador.

In 1925 she landed in the Bay of Guayaquil and reached Chunchi where she was a nurse and pharmacist for a short time. Accompanied by the missionary Bishop Comin and a small expedition group, Sister Mary and two other sisters entered the Amazon forest.

Their mission field was the land of the Shuar Indians in the south-eastern part of Ecuador. As soon as they arrived in Mendez, Sister Maria earned the esteem of the Shuar tribe by working with a penknife to save the daughter of a chief. She had been wounded by a bullet. They settled permanently in Macas, a village of settlers surrounded by the collective housing of the Shuar, in a small house on a hill. Just as Don Bosco was a father and teacher Sister Mary became a mother, and for 44 years she would be known as "Madrecita" by everyone.

A difficult work of evangelisation began in the midst of all kinds of risks. She was a nurse, surgeon, orthopedist, dentist and anesthesiologist, but above all a catechist rich in wonderful resources of faith, patience and Salesian kindness. Her work for the promotion of the Shuar woman flourished in hundreds of new Christian families, who for the first time could make a free personal choice as young spouses. She worked mainly in the field of education and health at the Pius XII hospital in Sucúa and in numerous clinics. She is the mother of the missions of the Apostolic Vicariate of Méndez: Mácas, Méndez, Sevilla don Bosco and Sucúa, making endless visits into the Amazon jungle.

On 25 August 1969, Sister Maria was about to fly to Sucúa for a retreat. The plane crashed shortly after take-off. The Shuar Federation radio gave the sad announcement: "Our Mother, Sister Maria Troncatti is dead". Her body lies in Macas.

who through the power of the Holy Spirit

stirred up in the Virgin Blessed Maria Troncatti

a maternal charity to announce Christ to the nations,

grant, through her intercession,

that we might be instruments of reconciliation and peace,

so that all may glorify your holy name.

Through our Lord Jesus Christ, your Son,

who lives and reigns with you in the unity of the Holy Spirit,

one God, for ever and ever. Amen.