Don Bosco: still working his magic for the young

Don Bosco: still working his magic for the young 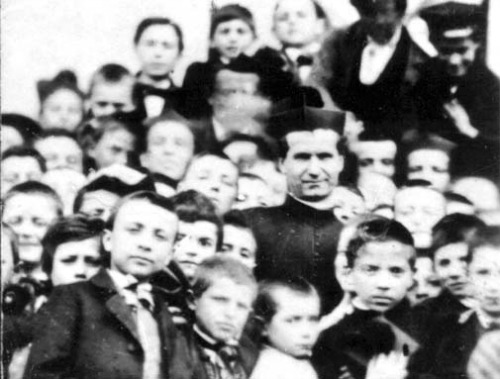 As we lead up to the feast of our founder on 31st January, Fr David O'Malley SDB reflects on the influences that shaped Don Bosco's vocation to work with the young, and the endeavours of his fellow Salesians.

Don Bosco worked magic. He could walk a tightrope, make things appear, juggle, do card tricks and entertain young people with stories and skills that would amaze them. He learnt these skills in childhood so that he could keep his friends away from bad behaviour and language and lead them towards prayer. His mother, Margaret was worried that he was spending time with the wrong sort but the young John Bosco argued that when they were with him they were better. He was right. Even in his early years Don Bosco could distract others from destructive behaviour and lead them towards being cheerful, forgiving and friendly.

His care for young people emerged from at least two sources: his family experience and especially the example of his mother. Life in John's family was marked by death, poverty, uncertainty, famine, bullying and hard work. The emotional impact of such deprivation raised a compassion in John that focused his vocation to poor youth. It was the experience that he was to recognise years later when he was a young priest living in industrial Turin. The street youth there had the same look of abandonment that he had felt in his own youth. He recognised it and it called him into action, at times to the point of recklessness as he later commented.

The other significant influence in his call was his mother: she taught him about the presence of God, how to remember God during the day, how to talk to God about one's struggles and how to stay cheerful because of that presence. It was that example that led Don Bosco to say to his leaders, 'here, we make holiness consist in being cheerful. We want no long-faced saints here! Through this kind of approach Don Bosco could draw out of young people a deep sense of prayer and an active charity for others. For Don Bosco all this came from the miracle of The Gospel lived in the presence of Jesus. There was no magic about it all but rather a simple trust that God was present whatever happened.

Don Bosco is also known as a dreamer. From the age of nine Don Bosco was aware of a rich vein of intuitive awareness about how God was at work in his life and in the world around him. In a dream at the age of nine he was directed by a 'majestic woman' towards young people at risk. He was told to deal with them gently and patiently and to prepare by making himself humble and strong. That dream almost laid out a blueprint for his vocation but it was probably not that clear in John Bosco's mind until later in his life. Many people find that their vocation only becomes clear in retrospect. Looking back, they see a pattern that was hidden. The steps they made were done so with uncertainty and with trust in God. The certainty only came later.

Don Bosco dreamed of new developments, the conversion of England, the building of churches, establishment of youth clubs and schools and the expansion of his work in the developing world. But he was also able to recognise intuitively the way that God was working in people around him. He predicted the pathways of many boys in his schools. He arrived at sick calls before he was called. He had a wisdom about people and saw the good in them. Perhaps that is why he was a good risk taker. He took all the youths out of the juvenile prison for a day and brought them all back safely. He challenged authorities, robbers, assassins and even bishops when he felt that there was just cause. He had a pastoral courage and a heart as wide as the sand on seashore. His dreams for young people became real because he shared them with others. He did that by starting the Salesian family: lay co-operators, priests, brothers and sisters to continue his work. They now carry Don Bosco's charism into the future with the same cheerful compassion shown by Don Bosco.

A spirituality for life

The spirituality left to us by Don Bosco is very simple but extremely challenging. It consists in four words: Home, School, Playground, Church, which fit together to form a holistic way of balancing life around the presence of God. Too much of any one will upset the apple cart and lead to problems. For example, Don Bosco often pulled young people out of church if he felt they were there too much and especially when games were going on in the yard outside. He would tell them to find God in the games and in their friends. He was aware of who felt at home and who did not and he encouraged others to help unhappy youth to feel more at home. He was also aware that learning was happening all the time and not just in class. He encouraged his community and staff to use a quiet word in the ear to correct behaviour rather than embarrass them in front of friends. Every relationship was a school for learning about life and about God. At times the heart of the young became an open book to him because he inspired such warmth and confidence that they could tell him anything and sort out their problems.

That confidence set up an electric current between young people and Don Bosco's teams. The young people could pour their hearts out to the adults around them and be sure of being heard. The problems they had were sorted out quickly and with plenty of learning in the process. The Salesians always made sure that a basic friendly approach underpinned everything they did. It is easy to see that Don Bosco's spirituality is first of all relational and then about acts of piety, prayer and sacraments. Because the Salesians knew their young people so well, they could adapt prayer and sacraments to the needs of the young people so that they could grow towards a mature faith. That desire to open up prayer and sacraments to a youthful culture led to some tensions with local priests and with the bishop of Turin. For a time, Don Bosco was suspended as a priest and had to appeal to Rome. False accusations were made against him and he had to survive a number of assassination attempts. Yet his work continued to grow and draw in more helpers.

Eventually, at his death in 1888 on January 31st Don Bosco had established two religious orders, a network of schools in Europe and in South America, a publishing house, children's homes and training colleges for priests. Today that network extends to over 132 countries. The British province of the Salesians is involved in schools, retreat ministry, in publications, vocational development, parish work and volunteering abroad. All British Salesian communities are multi-cultural, consciously learning to live alongside other nationalities. The common culture for all these communities is Don Bosco four words: we create a home, a playground a school and a church in all our communities. That makes each community a source of balanced energy and spirituality focused around the Gospel and the sacraments. Don Bosco said that we all need to know that we are loved, Salesians do that for young people and share that ideal in community. It is a good way to live Don Bosco today.

That way of life can also be lived in the heart of the family and Don Bosco's four words can shape relationships into a healthier pattern for parents and children. All of this can happen if people in the family know that they are loved. If that is a lived experience everything else follows. Pray to Don Bosco for young people and those who care for them and he will not let you down.