Our Vocations Director talks about vocation and community

Our Vocations Director talks about vocation and community 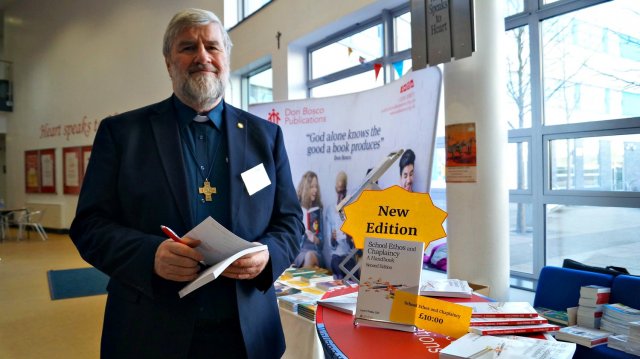 While we were still in more normal times, Fr David O'Malley SDB was the guest on the Sunday Joy programme on Battersea's Riverside Radio, interviewed by Asi Munisi.

In the hour-long programme, in which he also chose the music tracks, he speaks about his own vocation journey, and about Battersea Communities, the local project he is involved in, which aims to restore a sense of community and confidence to estates in the area.

Fr David's call to the priesthood and to the Salesians in particular was influenced by difficult and tragic circumstances in his childhood and teenage years. The son of a prison officer, he and his family moved home frequently as his father was relocated, and Fr David had attended eight schools by the time he was sixteen. He always found the local church a welcoming community when trying to settle in a new area. When David was nine years old, his brother Christopher died in a road accident, and this naturally affected him and the whole family profoundly. David says he had so many questions: "What happened? Why did it happen? Where is my brother now? And the Church was the only show in town answering those questions." The support he received fed into his growing sense of a calling to the priesthood, where he could give something back. Tensions between his parents who, sadly, did not get in well, created further difficulty, and again, David found support and hope in the Church, reinforcing his sense of vocation.

His experience guided his calling to be a priest and to help other young people going through hard times. "You put those two things together and what you get is Salesians," he said. He highlighted the little-known fact that the Salesians are the biggest single education network in the world. "We never give up on young people and we believe in their goodness, even when they don't", he says. FR David outlined the spirit of caring, gentleness and above all, optimism in relating to the young. "My own experience is that children are often the victims of their early experiences, so they need compassion, security, consistency and a strong but gentle discipline."

Speaking about his current work, David referred to the growing schools' network his is developing nationally, which includes schools that are not in Salesian trusteeship, but whose Headteachers have chosen to strengthen their own school ethos by adopting Salesian approaches.
He also discussed the project he works with locally, Battersea Communities, where his involvement has grown out of the desire of the Salesians of Don Bosco based there to understand, support and be fully involved in their local neighbourhood. The group of ordinary residents is currently quite small but very active, and includes the Catholic and Anglican parishes and people who are not part of any church. The group has spent time door-knocking to talk to residents, especially n the Surrey Lane Estate, and aims to listen to people who feel they do not have a voice, and support them in speaking for themselves about the issues that concern them.

David and Asi talked about the contrasts seen when walking around Batterea, with challenging estates almost opposite multi-million pound properties. David says there is a problem with how residents on the Surrey Lane Estate feel about their area, "their perception of where they are living as a dangerous place", lacking a sense of community, with few people knowing each other and mistrust and fear arising from this as well as from the very real problems it faces with knife crime and drugs. "There is a whole range of people who are coming and going, and then a core of residents who spoke of a wonderful sense of community in the past about 30 years ago, but that seems to have evaporated somehow."

The group has been supporting people to talk about their experience and worries, and empowering people to speak for their community to the council, and this is seeing some success. "Battersea Communities would like to see a lot more social housing. We don't agree with 'affordable housing' - the prices are not affordable by the average person, so I think we should stop using that term because it's misleading and needs to be challenged," he says.

The group was in the process of putting forward a proposal that a planned new development should include a community centre to replace one lost to parking around 20 years ago, and conversations with residents gained huge support for the idea, although the lockdown which was imposed shortly after the interview may have suspended the negotiations with council and builders for now.

Introducing his final music choice, 'Come As You Are', Fr David said this sums up the need for acceptance of each other, and he was dedicating it to the local community, "hungry for a sense of acceptance, the kind of approach we as Christians believe we find in God. In community, we all need to allow others to be themselves and be welcomed."

Listen to the programme using the link below