‘Listen to young people; listen to what God is saying to us.’

‘Listen to young people; listen to what God is saying to us.’ 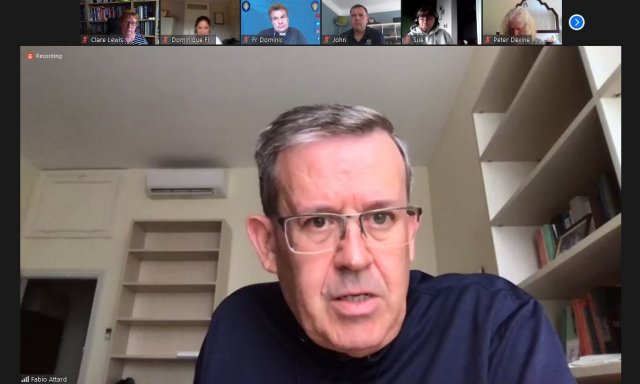 Don Fabio Attard SDB, the Salesians' General Councillor for Youth Ministry for the past 12 years, was the speaker at this week's online meeting for members of the Catholic Youth Ministry Federation of England and Wales (CYMFed). Don Fabio used his extensive experience to talk about listening and sharing as a vital approach to journeying with young people, and to urge a new outlook based on listening to the young and listening to God, as we move out of COVID restrictions. The video of his talk is now available on the CYMFed Vimeo channel - watch it below)

Don Fabio opened with the observation that 'youth ministry is one third listening and the rest is sharing.' He went on to ask the 33 participants, representatives of diocesan youth services, religious orders and other Catholic organisations, what has stayed with them from the experience of the Synod on Young People the Faith and Vocational Discernment. Comments centred on the fact that young people had been listened to in the process, and included the impact of Pope Francis's encouragement of the 'creativity and audacity' of the young; the connection with this time of pandemic, where young people in parishes have taken the lead in providing technical support for streaming services and events; and the fact that the Synod and Christus Vivit came out in the light of climate change concerns, where the young were leading demand for action.

After listening to the responses, Don Fabio said that listening allows young people to be themselves, and that 'we are not the ones to stop them; we are the ones to let them emerge.' He told the meeting that he has recently been reading studies on how people are coping during the pandemic, and that many are struggling because 'their identity has been their doing, and their doing was feeding their ego'; when what they do has ebbed away, they can feel desolate as they have lost this identity, and have not discovered how to be themselves.

Don Fabio urged everyone to read Pope Francis, going back to Evangelii gaudium, and to also read Pope Paul VI's 1975 exhortation, Evangelii nuntiandi, to help us understand our role in evangelisation: how do we communicate what we believe to be the 'good news'? He pointed out that in youth ministry and in the Church in general, we too often create a scenario where 'we are the benefactors and young people are the beggars', but listening to the young changes and equalises that situation, 'communicating value to the young person'. When we genuinely ask a young person 'How are you?' and we listen to their answer, we are putting our whole being at their service.

He spoke about meeting young people where they are, but rather than leaving them there, a 'significant adult' will help them to reach the place are called to be, when the time is right. This is his definition of journeying with the young, and it embraces the elements of listening, empowerment and discernment. 'Communicating love creates processes of the fullness of humanity, the divinity in the heart of young people.'

He pointed out that as adults, we have a tendency to interpret our journey with young people today through the experience we had when we were young, but so much has changed, and today's young are not 'photocopies of ourselves' at that age. 'Language, imagination, understanding of authority has all changed,' he said.

'They have the questions, but they don't have the vocabulary, and it's communicated in a non-verbal way'. In order to listen and accompany, we need to learn that language.

Don Fabio used the example of Jesus meeting the disciples on the road to Emmaeus, 'He joins them when they are leaving everything behind. He went with them in the wrong direction, listened to the wrong answers … he went with them, and they asked him in.'

'Unless I feel challenged by the story of a young person, I will never be able to challenge them to emerge,' he said. He referred to the Holman Hunt painting, The Light of the World, where the door Jesus knocks on has no handle, because it can only be opened to him from the inside.

'Listen,' he said, 'even if the young are going the wrong way, or saying the wrong things. We become part of their story and deepen a relationship that is adult, transparent and honest, and they will arrive at a point where their story is open to our story.' Fr Fabio said we need a pedagogy of love, not an A-Z route, because everyone has their own path.

Don Fabio said he always asks youth ministry personnel he meets if they are being accompanied at the moment, because 'I can accompany others only in the measure that I am being accompanied. The moment that I experience accompaniment, I know my spiritual director is going to encourage me to deepen my relationship with God. I know I am loved. Faith is about love; we are faith-filled people because we experience love.'

He asked the participants to consider how far we are listening to God, and how many youth groups are dedicating space and time to a mystic listening and reading of our present situation. 'What is God communicating to us through the stories of so many people who are finding it difficult at the moment? What is he saying in terms of our response? It's time to discover he centrality of the Word of God, otherwise, we risk responding only from a philanthropic point of view … we are called to go beyond this, to live the agape. I believe this is a huge opportunity for the Church: listen to young people; listen to what God is saying to us, through us, among us.'

On the subject of our environment, which motivates so many young people, he pointed out that this is a vital issue, and again, one where we are called to go beyond a merely ecological approach. He said, 'We are called to put this within our journey of faith,' as an opportunity for us to care for the gift of the earth, entrusted to us by God. 'We bring the Gospel logic to this, so we reach our aim from a mystical as well as a human point of view,' he said.

Speaking of the whole synodal process, Don Fabio said that so many young people seized the opportunity they were offered 'to be active protagonists' and stressed that this is something to be continued in the church, with listening at its centre. He noted that during the pandemic, young people have been involved in and have led parish projects to distribute food and food vouchers, operating from parish halls, and they have befriended older people who would otherwise have been isolated during lockdown. He said the Synod preparations had revealed 'hidden gems' in the creativity and audacity of the young, and this experience, together with the action of the young during the pandemic, must be built on by our Church. We should ask young people how they felt they lived these moments, and ask what can come out of this.

In response to a question on the range of activities being offered by our churches online during the pandemic, Don Fabio said that while a concentration on online Masses had answered a need for many people, and had resulted in more people connecting, we should all ask ourselves 'are we using the Internet as a tool, or are we using it imaginatively to new things?' He said as a Church we can share our new ideas, moving beyond taking the sacraments online to providing things for families to use at home, for example.

Speaking of the changes the world faces as restrictions are lifted, he said, 'When COVID allows us to come back together, we are not going back to the way we were. We are going to have that "audacity."'