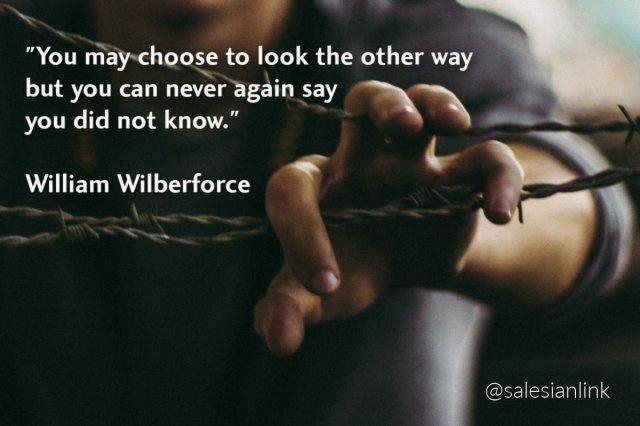 In late 2020, most of us would hope that the evil of slavery was history, a warning from a dark past that everyone is determined never to relive. But that is not the case, and 'modern slavery' is part of our 21st century world, and our own society. The UK even has an Independent Anti-Slavery Commissioner – a role most of us would have thought was no longer needed.

In 1839, a group of English abolitionists including Thomas Clarkson and Fowell Buxton, formed the Anti-Slavery Society, and held the world's first anti-slavery convention in London the following year. Now the oldest human rights charity in the world, Anti Slavery International (ASI) is still working to eradicate slavery, support victims of trafficking, and end bonded labour and forced prostitution across the globe. Last Thursday, Fr Marco Villani SDB, our Province Justice and Peace Delegate, was invited to attend an online conference for supporters of ASI, and he has shared some insights into the work of the charity, the extent of the problems, and the need for each of us to act to ensure freedom for all.

Jasmine O'Connor, CEO of ASI, told the online audience that there are 40 million people around the globe who are held in slavery today, including many children born to people in slavery. While the work of her organisation has helped to release 20,000 people, the scale of the issue is clearly enormous.

She highlighted the fact that discrimination contributes to slavery, creating people who are more vulnerable to being victimised, along with the impact of climate change on local populations, forcing people to migrate, with the risk of falling prey to traffickers.

Ms O'Connor said slavery and its impacts can be most closely seen in countries like Mali, Mauretania, Niger, Senegal, Mauritius, China and within the EU.

Our own everyday actions and choices feed the problem, as we contribute to climate change and purchase goods produced by enslaved workers. China is one of the world's biggest cotton producers, and 90% of the cotton produced there comes from Xinjiang, where the Uyghur minority lives in repressive conditions, subject to forced labour. We may try to make ethical choices in the end-products we buy, but we often know little of the origins of the materials used to make them, or the lives of the workers further back in the chain of production.

In the UK, many of us see people in slavery all around us without even realising. ASI says that in 2019, 10,000 people were reported to the authorities, and they believe the true scale of slavery in our country is much higher.

Modern slavery in the UK can take many forms, including forced sexual exploitation, domestic slavery or forced labour on farms, in construction, shops, bars, nail bars, car washes or manufacturing.

Forced labour, the most common form of slavery in the UK, is fuelled by demand for cheaper goods and services, whether that is driven by choice or by necessity, as the low-paid have little choice. It includes people working in manufacturing and agriculture, domestic homes, nail bars and car washes.

Trafficking for sexual exploitation is perhaps the form of slavery in the UK that most people have heard of through the media, but a growing form of modern slavery in own country is trafficking into drugs crime. Many people of all ages are trafficked here from Vietnam to work in cannabis growing, and drugs crime is a major aspect of child slavery in the UK. This affects mostly British children, who are forced and trapped into 'county lines' drug dealing. It is especially shocking that trafficked children, forced into several forms of slavery, have been found in every single local authority in the UK. (ASI video)

ASI works with businesses to encourage them to remove links to slavery from the global supply chain, for example, urging UK businesses to go beyond the Modern Slavery Act and voluntary corporate social responsibility codes, which ASI says are clearly not enough to end the abuses. The organisation is collaborating with partners across the EU and within the UK to call for laws making businesses legally responsible for preventing human rights abuses in their supply chains

The COVID-19 pandemic has had contrasting impacts on modern slavery. With the attention of national governments and authorities diverted, some traffickers have had greater freedom to operate; the vulnerability and isolation of potential victims has been exacerbated; and victims are less likely to be identified, or to encounter someone they can approach for help. On the other hand, the financial impacts of the restrictions have led to some releasing the people they have in forced labour, as it is no longer economically viable to keep them.

However, escape or release does not necessarily end the misery of victims. Our legal system in the UK is not set up to support people who have been trafficked and exploited, and they are likely to be treated as illegal immigrants. A recent report from the charity Every Child Protected Against Trafficking (ECPAT) points out that while the UK government has fully committed to rolling out the provision of specialist support for child victims, as set out in the 2015 Modern Slavery Act, five years on, this is only operating in a third of local authorities. (Child trafficking in the UK 2020: A snapshot).

ASI says that cuts to public services have decreased the ability of authorities to fully investigate trafficking cases, with too few criminals brought to justice, and too little support for former slaves. They are campaigning strongly for access to justice for victims, and offering practical support to help them rebuild their lives.

The following websites have more information about modern slavery and child trafficking, and offer ways in which each of us can help and support the campaign to end slavery and human exploitation.

Every Child Protected Against Trafficking