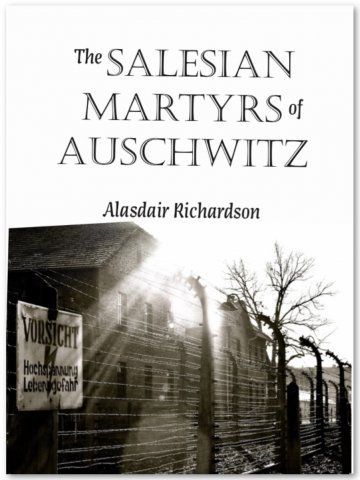 'The Salesian Martyrs of Auschwitz,' a new book by Dr Alasdair Richardson, is in its final stages of production and will be published by Don Bosco Publications in January 2021. The book will be available to buy from our online bookshop following its launch, costing £12 +p&p, and orders can also be placed by email, post or phone.

January has been chosen for publication to mark Holocaust Memorial Day, which falls on anniversary of the liberation of Auschwitz-Birkenau, the largest Nazi death camp, on 27 January 1945. Between 1940 and 1945, about 1.3 million people (mostly Jews) were deported to Auschwitz by Nazi Germany, and 1.1 million of them were murdered. Alasdair's book tells the stories of the 22 Salesians of Don Bosco who were among them.

Fr Karol Golda SDB was one of them. Fr Karol was born on 23 December 1914 in Tychy, Poland. He went to the Salesian College in the town of Oświęcim (Auschwitz) and joined the novitiate when he left in 1931, making his first profession the next year.

Following his studies and ordination as a priest in Rome, he returned to Poland, where he was involved in pastoral and youth work. On 31 December 1941, he was arrested and sent to the Auschwitz camp, where he was marked with the prisoner number 18160. He was condemned to death for hearing the confessions of the German soldiers, and executed on 14 May 1942. He was 27 years old. He was proclaimed Servant of God and the process of his beatification continues.