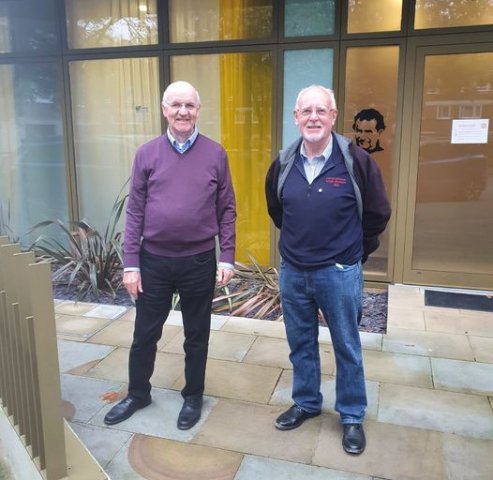 A significant birthday and a meeting with an old friend brought back memories of Salesian days for former Brother, Paul Barnes. (Photo: Fr Tom Williams on the left, with Paul)

On Sunday 8th November, my 80th birthday, I had the pleasure of meeting up with Fr Tom Williams SDB, Rector in Battersea. I was in my "Bubble" with my son Alban, his wife Karen and three grandchildren. As a surprise, Alban drove us to Battersea for the meeting. Fr. Tom had said mass for them the day after their wedding which was 15 years ago. He also baptised their three children. It was a nostalgic reunion as he and I were Brothers together in the early 60's in Battersea. Fr Francis McCabe was Rector, Fr Albert Carrette Prefect/Bursar, FR Bill Chadwick, Headteacher, Fr Bernard Higgins, Catechist, and Fr Francis Gaffney was Parish Priest, and kept a budgie!

One of my jobs was to get up early each morning at 5.15 and go and make sure everyone else was awake. One morning, in going to the Salesian houses in Orbel Street, I found an old woman lying on the floor under the ambulacrum (covered way). I went straight to the Rector to tell him, he told me to tell the Prefect who in turn told me to tell the Catechist, Bernard Higgins who in his usual calm manner said "Ok Brother, leave it with me I will sort it". That evening on returning from College the billboards at Clapham Junction read "Battersea riddle of injured woman"!

I used to go out during the day to study and Fr Tom would go out in the evenings to study, so we only really met at the weekends! On Sundays, we used to run the Oratory with Sisters Frances and Georgina, and on Saturdays we would watch Chelsea one week and Fulham the other week.

Looking back over those years, I have a lot to be thankful for and I pray for all those who have passed on but who helped me in many ways. May they rest in peace. I celebrated my 21st birthday there and did not even have a glass of sherry, how times have changed! It was good to share memories of those happy and formative years. Thank God for Don Bosco.