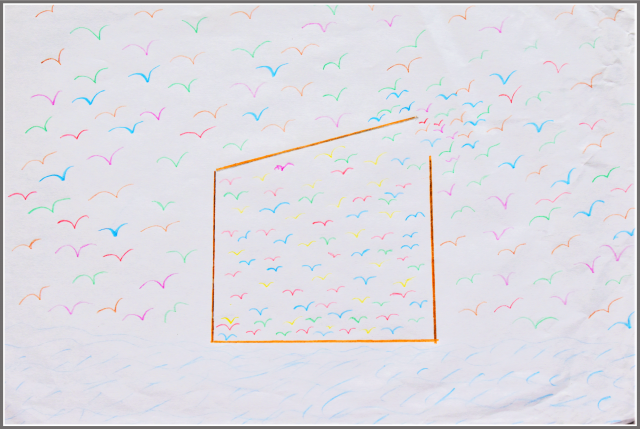 An artwork by Alfie, an 11-year-old student from St John Bosco College Battersea, has won a prize in Aid to the Church In Need's (ACN's) #RedWednesday art competition.

Alfie's image, which represented the ACN theme 'Release Me' with a stylised image of birds soaring to freedom from an open frame, was awarded 3rd prize in the 11-16 age group, the category that received the highest number of entries.

The competition was one of a range of activities offered by ACN as part of this year's #RedWednesday event, highlighting the plight of people who cannot practise their faith in freedom. The theme was integrated into Year 7 RE lessons at SJBC, covering the section of the RE syllabus exploring the nature of the worldwide church.

Alfie has captured the theme 'release me' very effectively with a very simple and clever use of line. We can feel the movement of this rush of birds being freed, depicted through the use of perspective with large and small birds, which then fly everywhere as far as the eye can see. We like that Alfie has used his imagination to show us the birds still inside the box waiting to be freed, and also the realism of crowding at the box opening where the birds are managing to escape.

Visit ACN's website to see the work of all of the winners and runners-up.