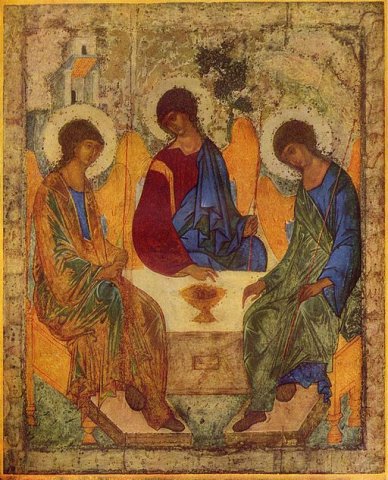 In this week's Catholic Teacher Article, Mike reflects on the gospel reading John 1:35-42.

My study at home has three icons on display.

First, The Trinity created by Russian painter Andrei Rublev in the 15th century.

And finally, a painting of St Jean-Baptise de la Salle.

These sacred images ground me in the reality that the divine flow of the Trinity is the constant outpouring of love that binds all things. Such love overflowed in St Jean-Baptise de la Salle when he gave up his family wealth and opened his heart to the vocation of teaching. The patron saint of teachers reminds me constantly that I must teach every child as if they were the children of princes, indeed they are the children of the one true prince, Christ the Prince of Peace. St John Bosco, as the patron saint of children, reminds me that anything can be achieved with young people when we teach with loving kindness and open our hearts to the reality that children face. These icons are my constant "aide-mémoire".

As I was sat in Mass on January 17, the reading jumped out at me. The dialogue between Samuel and Eli is beautiful. Samuel can recognise the voice of God. Three times the Lord calls him, until on the advice of Eli, Samuel says, ''Speak Lord; your servant is listening.'' These words of Samuel hit me! They made me sit up. For surely, you and I have heard the voice of God and have responded in the same way. I firmly believe that I am a teacher not by my own will, but by the will of God. I had to discern my vocation. Many times, like Samuel, I did not recognise the voice of God in my life, and I failed to read the signs that the Lord was offering me. Vocation requires work and faith. One must be open to it. Samuel had the wise Eli to direct him. I have had my wise guides—de la Salle and Don Bosco amongst them. These guides have helped my vocation to grow and reveal itself. God does not work alone.

As a teacher, I feel I have a role to play in helping the young people in my care to explore their own vocation. Note, I say "explore" not "direct". The gentle and loving whisper of the Lord is heard in all ears. My humble role is to encourage my pupils to listen, read the signs and discern the spirits. Several years ago, a boy opted for childcare and was the only male student in the class. He came under a lot of pressure from many within his year group. He turned up at my door and said he wanted work in a nursery as he loved little children—he was the eldest of five children—yet he did not feel he could take the "stick"; and he was worried that a nursery nurse's job would not pay enough to raise his own family when the time came. I was touched by this young man's sincere honesty and his pain. We talked about the issue. I reminded him of the countless jobs that people do that they do not like or enjoy and how they do not find happiness and peace. We talked about the "best" job, concluding that it is the one that makes a person happiest. We spoke about resilience and chasing one's dreams. Together we journeyed. There was pain, anguish and often tears as the brave young man seemed to swim against the masculine culture of his situation. Yet like de la Salle and Don Bosco, who had their own critics and took many a cruel blow, this young man did say, "Speak Lord; your servant is listening." As I write this, he is the headteacher at a nursery in Bootle! The spirits guided him to where the Lord wanted him to be.

The Gospel reading on January 17—John 1:35-42—recalls the calling of the disciples Simon and Andrew.

The next day John was standing there again with two of his disciples, when he saw Jesus walking by. "There is the Lamb of God!" he said.

The two disciples heard him say this and went with Jesus.

Jesus turned, saw them following him, and asked, "What are you looking for?"

They answered, "Where do you live, Rabbi?" (this word means "teacher").

"Come and see," he answered (it was then about four o'clock in the afternoon). So they went with him and saw where he lived, and spent the rest of that day with him.

One of them was Andrew, Simon Peter's brother. At once he found his brother Simon and told him, "We have found the Messiah" (this word means "Christ"). Then he took Simon to Jesus.

Jesus looked at him and said, "Your name is Simon son of John, but you will be called Cephas" (this is the same as Peter and means "a rock").

The line which really touches me is "come and see". The invitation of the Lord is always there. We simply have to "come and see", and as it says above, "spend the day with him". As teachers, we should always support our youngsters on their vocational journey. In doing so they will one day, like Samuel, have the courage to say, "Speak Lord; your servant is listening", and surely they will hear the Lord say, "come and see".