'The Hill We Climb'

'The Hill We Climb' 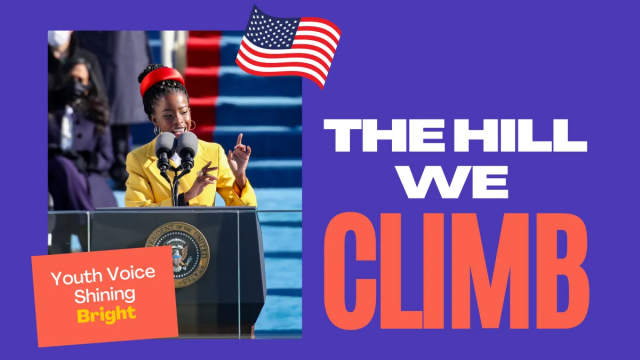 Fr Gerry O'Shaughnessy SDB reflects on the message of hope and unity for all of us in the poem for the inauguration of the new President of the USA, composed and performed by Amanda Gorman, the USA's first Youth Poet Laureate. The image is from Club Experience Blog (Boys and Girls Clubs of America); this site has a wealth of valuable resources for youth development.

Whatever your politics, I hope you were able to catch some of the splendour that is the inauguration of a new President of the United States—given the demands and horrors of the pandemic it had to be somewhat muted this time. Only a fortnight ago, the democratic will of the people was under attack at the very place where President Biden and Vice President Harris took their oaths of office. I was deeply impressed by performance of Amanda Gorman, a 22-year-old Los Angeles native—a poet and performance artist who was asked by the Biden team to write the 2021 inauguration poem. Like the new President, she has a speech impediment and worked hard to overcome it. She was asked to write a poetic prose piece for this momentous occasion and found that she had writer's block; as the date drew closer, she discovered it increasingly difficult to put pen to paper. Then the Epiphany Day riots took place—with the rest of the world, she watched in horror as the US Capitol was overrun by rioters, resulting in five deaths and numerous injuries. Whatever side of the political aisle you come from, you could not accept the blind, partisan vandalism that was on show—the fact that this act of insurrection seemed to be actively encouraged by politicians both inside and outside this hallowed seat of government, only served to make the criminality even more obvious. Lies or 'alternative facts' were being peddled as truth and any dissension denounced as 'fake'. The way we received and understood factual news was now being dictated by whatever side we happened to be on in this messy 'uncivil war'. One thing was clear: a rioting mob took over the Capitol, forcing law makers into hiding, in fear for their lives.

This day of infamy was the catalyst that Ms Gorman needed; she saw the horrors that a politics of division sowed in living technicolour, broadcast live to her home. She was aware of the countless messages on social media from the rioters, explaining their rationale for such treachery. We are well aware of the reasons touted by the former President and his supporters for their displeasure; never before had a sitting President received so many votes—but the problem was that President Biden received seven million more popular votes, as well as winning the Electoral College. The fact that the Trump family were less than gracious in making the transition to a new administration had not gone unnoticed by the watching world. All the conventions and traditions were ignored in this petty lack of diplomacy. US presidential elections, down through history, follow certain unwritten protocols; these simple traditions are important because they rise above party politics, as the old and new administrations work together for the good of the nation. Michelle Obama invited Mrs Trump to the White House for the traditional afternoon tea, even though the new First Lady had helped to spread the malicious birther lies against her husband—even under such extreme provocation, Mrs Obama followed the protocol. Sadly, this graciousness was not followed by the outgoing First Family on Inauguration Day, as they left Washington DC early and failed to join other former Presidents, from both parties, at the inauguration in this act of national unity.

Ms Gorman addressed the need for unity in her powerful presentation:

When day comes we ask ourselves, where can we find light in this never-ending shade?
The loss we carry, a sea we must wade.
We've braved the belly of the beast.

and the norms and notions of what 'just' is isn't always justice.
And yet, the dawn is ours before we knew it.
Somehow we do it.
Somehow we've weathered and witnessed a nation that isn't broken, but simply unfinished.
We, the successors of a country and a time where a skinny Black girl, descended from slaves and raised by a single mother can dream of becoming president, only to find herself reciting for one.

She wanted the nation to see beyond 'the never ending shade' that led to that infamous riot. As a person of colour, descended from slaves, she realises that neither her sex or ethnic background define her—she is a free citizen of the United States. The events of Epiphany Day cannot define the nation that sees itself as 'the land of free and the home of the brave.' (from US national anthem). The poem promotes unity, despite colour, culture and character; she pleads for a common ground that is central to the thinking of Pope Francis:

We close the divide because we know, to put our future first, we must first put our differences aside. We lay down our arms so we can reach out our arms to one another.

Mr Biden and Ms Harris now begin a journey of unity. If there is going to be movement, we need to 'put differences aside' so that it can take place, even in the most difficult circumstances. The new administration must, as Mr Biden affirmed, offer leadership for both sides of the political divide. He is called to be the leader of a nation and not just those who happened to vote for his party.

Ms Gorman spoke of how we can be hurt and tired in our quest to 'never again sow defeat.' She takes up a central theme of the Bible: do not be afraid; we have to move forward with confidence and hope—a central theme of the Salesian Strenna for 2021. In these pandemic times, we are invited to be moved by hope and to share it with those we meet: 'See, I am making all things new' (Revelation 21:5). We need to see beyond lockdown, sanitisers and masks, realising that we can do our own small bit to stop the spread of the virus. We look forward to meeting up again and sharing the spirit of hope, so evident in the inauguration poem:

Let the globe, if nothing else, say this is true:

That even as we grieved, we grew.

Scripture tells us to envision that everyone shall sit under their own vine and fig tree and no one shall make them afraid.

In these stressful, yet hope-filled, times, Ms Gorman invites us 'to climb the Hill' of problems, division and hate. She takes up another strong theme of the Holy Father in celebrating the bridges that we have made. Bridges imply a moving out from ourselves, while walls, whoever pays for them, can only promote inward and selfish narcissism—we are all better than that. These COVID-19 times have revealed our inner strength and an ability to adapt in ways that support and, again, give hope.

Can you be a bridge-builder today and reach out to those you might see as 'different'? We need to realise that it is our differences that can make us stronger as a nation and as a global family—we can each bring something to the table of life that is unique and personal. These unique and personal gifts help to build up the community that we share: be it family, a religious community, a Church, or a nation. As the Epiphany Day rioters chanted 'USA, USA', we did not see respect for national institutions, rather disrespect for the traditions and common history that the citizens of the US share. It is not about petty nationalism or trying to assume that one side is somehow 'better' than the other. The US has traditionally been a beacon of hope and freedom for so many across the world—my own family found that hope, as poverty forced them to leave the land they loved to become immigrants in a new land that they now love. Likewise, Mr Trump has German and Scottish ancestry, while President Biden claims an Irish past—both are typical of millions of US citizens, who lived their dreams:

If we're to live up to our own time, then victory won't lie in the blade, but in all the bridges we've made.
That is the promise to glade, the hill we climb, if only we dare.
It's because being American is more than a pride we inherit.

It's the past we step into and how we repair it.

The events of these past few months have taken us from mob rule to democracy prevailing. The call is end the 'uncivil' war that we have seen acted out in the streets of Washington DC and other cities across the nation. Ms Gorman ends her emotive pleas in a spirit of hope, peace and reconciliation; she celebrates diversity and difference that I hope people will take fully to heart. Her poem is a challenge to each of us, no matter what nation we live in to see the good in everyone. We need to appreciate hope and faith in the darkest of nights, either brought by divisive politics or the tension of a global pandemic-we can 'step out of the shade', but only if we can be 'brave enough to see it':

We will rebuild, reconcile and recover.
In every known nook of our nation and every corner called our country, our people diverse and beautiful, will emerge, battered and beautiful.
When day comes, we step out of the shade, aflame and unafraid.
The new dawn blooms as we free it.
For there is always light,
if only we're brave enough to see it.
If only we're brave enough to be it.

Amanda Gorman, The Hill We Climb, Poem for the Inauguration, 20 January 2021

In the official prayer of blessing for the new administration, led by the former President of the world-famous Georgetown University, Fr Leo O'Donovan SJ shared the theme of reconciliation, remembering Archbishop Carroll's prayer for the first President of the Republic, George Washington. The role of the President is to unite and offer hope in the most difficult times—whatever our own personal politics, we need to remember the people of the UNITED States of America and those asked to govern:

We pray you, O God of might, wisdom, and justice, through whom authority is rightly administered, laws are enacted, and judgment decreed, assist with your Holy Spirit of counsel and fortitude the President of these United States, that his administration may be conducted in righteousness, and be eminently useful to your people, over whom he presides; by encouraging due respect for virtue and religion; by a faithful execution of the laws in justice and mercy; and by restraining vice and immorality.

John Carroll, (1735-1815), Roman Catholic Archbishop of Baltimore, from the prayer he composed for the Inauguration of President George Washington, 30 April 1789