Cardinal Bo calls for peace and dialogue after Myanmar coup

Cardinal Bo calls for peace and dialogue after Myanmar coup 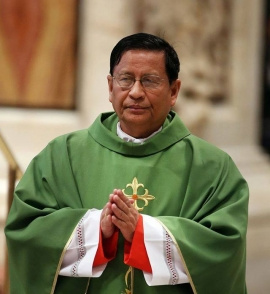 Cardinal Charles Maung Bo, Myanmar prelate and a Salesian of Don Bosco, issued a letter on 3 February calling for peace and democracy following the coup in his country on Monday. He writes 'as a spiritual leader', to the people of Myanmar, the civilian leaders, the Myanmar Army, and the international community.

'I write with love towards all, seeking a durable solution, praying for an end forever to the periodic darkness that envelops our dear nation', he begins.

He calls on the people of Myanmar to stay calm, and use nonviolent methods of protest to avoid further bloodshed. He addresses health workers, praising their dedication and courage throughout the pandemic, and empathising with their pain, but pleads with them not to resign in protest. He asks the Myanmar people to put aside hatreds and to 'pray for all, pray for everything, avoiding occasions of provocation.'

Addressing the Myanmar Army, he laments opportunities lost by a lack of communication that contributed to the crisis, and asks how they will regain the trust of the people after the coup, and make good on their promises of multiparty elections after a year. 'Your actions need to prove that you love them, care for them,' he writes, 'Once again, I plead with you, treat them with great dignity and peace.' He refers to the arrest of elected politicians, writers, activists and young people: 'They are not prisoners of war; they are prisoners of a democratic process. You promise democracy,' he writes, 'start with releasing them.'

Writing to the civilian leaders of Myanmar, he assures them of prayers for their release, and again stresses that the 'lack of DIALOGUE and communication and lack of acceptance of one another' had played a major part in bringing about the crisis, and urges them to 'Please listen to others.'

He expresses gratitude to the international community for their concern: 'We are grateful for your compassionate accompaniment at this moment. It matters a lot,' he writes. But he goes on to urge them not to impose sanctions, as history shows these do not benefit the people, 'Sanctions risk collapsing the economy, throwing millions into poverty,' he writes. 'Engaging the actors in reconciliation is the only path.'

His closing words hold out hope:'Peace is possible. Peace is the only way. Democracy is the only light to that path.'

Please join Cardinal Bo in praying for the people of Myanmar.

Read the letter below.