Our apprentice is now a permanent member of our team! #NAW2021

Our apprentice is now a permanent member of our team! #NAW2021 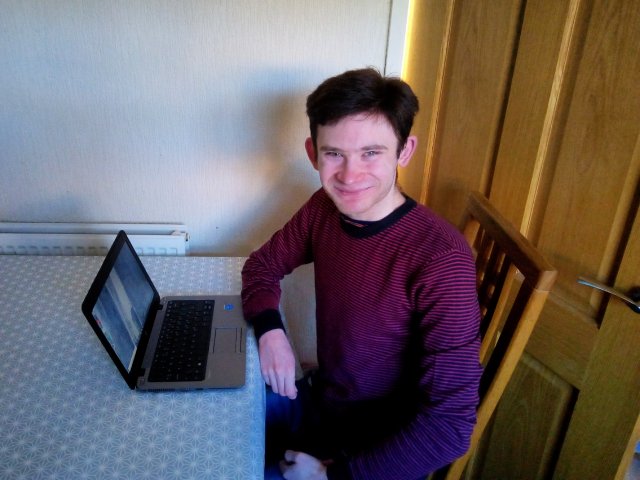 In National Apprenticeship Week (February 8–14), Sarah Seddon, Manager of Don Bosco Publications, writes about the benefits of apprenticeship, and this year's theme for the week: #BuildTheFuture. (Photo: Dominic working from home)

This time last year, before any of us had an inkling of how 2020 would unfold, our apprentice, Dominic, was beginning his third month with us. We had assessments planned, workplace observations with his college tutor scheduled, and Dominic was starting to find his feet, and his voice, in our small team. College sessions were timetabled for one afternoon each week, and everything was in place in the office to support Dominic's continuing nine months with us as an apprentice.

Within a month's time, we would enter the first lockdown of the pandemic, and Dominic's work and training moved from the office to his home. Email became our most used mode of communication, office discussions were replaced with Zoom (before then, Zoom for me was an ice lolly, or a song by Fat Larry's Band …). The usual office repartee of 'the printer's jammed again' and 'coffee, anyone?' was replaced with, 'you're on mute; turn off mute' and 'I can hear you, but I can't see you'. It's been a steep learning curve for all of us but especially for Dominic. Determined to continue with building Dominic's future, we had to look beyond the usual methods of training and learning, and devise ways for him to complete his assignments and continue to contribute to the effective running of the 'virtual' office.

When we were slowly allowed back into the office, now transformed with screens, hand sanitisers and one-way systems, his observations took the form of him rotating his computer screen to show his tutor how he filed documents, answered the phone and created invoices. Virtual observations are no mean feat.

At the beginning of December, Dominic successfully completed his apprenticeship, and we are delighted that he accepted our offer of fulltime employment. Let's face it, who wouldn't want to employ someone who has shown tenacity in continuing his training online, demonstrated flexibility in working from home and in the office within stringent health and safety guidelines, and continued to build his future in spite of the barriers the pandemic has thrown at him. It's great to have him on our team, where he works across the Publications and Communications departments.

I'll give the last word to Dominic himself:

'Despite the disruption caused by the pandemic, my apprenticeship has been greatly helpful in helping me develop the important skills that we all use in our professional careers. Whilst I may not have been able to follow the plan outlined above, my apprenticeship has still allowed me the opportunity to build a better future for myself, and I can only hope that these opportunities will be made available to more young people around the country.'