RE Teachers learn about Salesians of Auschwitz

RE Teachers learn about Salesians of Auschwitz 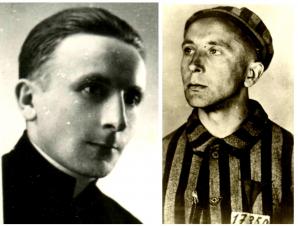 Dr Alasdair Richardson spoke about his new book 'The Salesian Martyrs of Auschwitz' at the first of a short series of webinars hosted by Hampshire Inspection & Advisory Service this week. The theme of the series is 'Holocaust & Genocide: Issues for Religious Education', and the attendees included RE teachers and advisors from around the region.

Alasdair spoke about his research and how teachers can draw on the stories of the 22 Salesians who were imprisoned at Auschwitz to teach about the experiences of Polish Catholics under Nazi persecution during World War II. The theme for this year's Holocaust Memorial Day was 'Be the Light In the Darkness', and Alasdair told the story of Blessed Józef Kowalski, (pictured), the Salesian martyr who was beatified by Pope John Paul II in 1999. Fr Kowalski was murdered at Auschwitz for refusing to trample on his rosary. He spent a little over a year in the death camp, during which time he secretly ministered to other inmates, celebrating Mass, bringing communion to the sick, and hearing confession. His brother Salesian and fellow inmate Fr Stanisław Garecki recalled how 'Father Józef Kowalski had been sent to the death camp where the kapos [senior prisoner] said there was no God—he brought God to his fellow prisoners.'

Truly, he was a light in the darkness.

A selection of the many tweets from teachers who attended the webinar shows how helpful they found it:

"After a long day of remote teaching wasn't really looking forward to another 90 minutes with a screen tonight—how wrong was I. Very informative talk by @drajrichardson—has got me thinking about planning next year's Year 9 day (and scheme)."

"Thanks so much for sharing the fascinating and important stories of the Salesians of Poland during WWII and for your insight into teaching genocide in RE."

"Such a moving and thought-provoking webinar this evening. Demonstrated the power of stories but also a valuable discussion about what the RE community has to offer students that is unique when teaching about the Holocaust."

Alasdair's book 'The Salesian Martyrs of Auschwitz' is available from our online shop (see link below), or contact Don Bosco Publications: email publications@salesians.org.uk or phone 01204 308811.

A five-panel pop-up exhibition, telling the story of three of the Salesians imprisoned at Auschwitz is available to book to visit schools and parishes in the coming year. As a former teacher, Alasdair is keen to share these stories and speak to students, parish or community groups (virtually or in person once government guidance allows). Please do get in touch by contacting him at alasdair.richardson@winchester.ac.uk for further information.