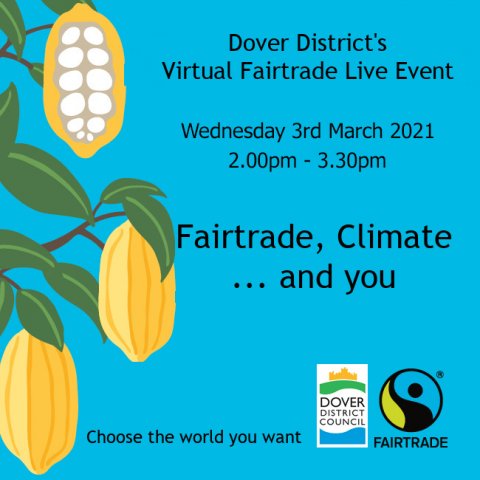 The theme for Fairtrade Fortnight this year, (22 February to 7 March 2021), is 'Choose The World You Want'. Our Province Justice and Peace Coordinator, Fr Marco Villani SDB, reports on an online event he attended this week, organised by Dover District Council in partnership with the Fairtrade Foundation:

The main speaker for the event, Adam Gardner, Head of Campaigns for the Fairtrade Foundation, spoke on 'Fairtrade, climate and you', focusing on the effects climate change is having on producers. He talked us through the scope of the Fairtrade Foundation's work, which deals with 1.7 million workers in 75 countries, 1599 different projects, and 28 Fairtrade organisations in 34 countries.

One third of Fairtrade standards are environmental standards. This highlights the challenge to countries such as Malawi, the fourth poorest country in the world. Crop diseases such as coffee leaf rust, which blights the coffee bushes, are spreading more widely because of increased temperatures and changes in rainfall patterns. Weather events such as hurricanes are increasing in intensity with global warming, becoming even more devastating. In late 2020, a hurricane in Honduras destroyed not only crops but the infrastructure that was used to support Fairtrade businesses.

Many farmers are not in a position to cover the increased costs brought about by the effects of climate change, or to respond to environmental changes and disasters such as less predictable seasons, flooding, droughts, more resistant plant diseases, crop destruction, and the resulting lack of food.

By 2050, as much as 50% of the global surface area used for coffee production may be lost due to climate change. Banana growing in ten countries, including India, Brazil and Colombia, may also be affected, and the temperature in Ghana and Cote d'Ivoire may be too hot to grow cocoa.

He presented a thought from Angel, a small farmer: 'If I had to choose a world I want to see, it would be a world where every individual would be conscious of the fact that, if we continue harming nature, we will always have these atmospheric events that occur as a result of climate change.'

In response to increasing challenges, nurseries have been established, with the planting of 1.2 million cocoa trees and 300,000 canopy trees to protect the them, also helping to limit soil erosion, absorb carbon dioxide, emit oxygen, and provide food and shelter for animals to promote biodiversity.

Fairtrade provides a safety net to protect producers from low prices, with an additional Fairtrade Premium to allow communities to invest in their businesses or in education and social projects, while seeking to protect the environment. This is important as smallholder farmers manage 80% of the world's 500 million farming areas.

Local action in the UK is vital in encouraging and supporting Fairtrade. Councillor Pam Brivio spoke about 'Fairtrade Towns', a scheme aimed at making Fairtrade a key part of the local community. Dover has had 'Fairtrade Town' status since 2009, and Deal since 2010. Garstang in Lancashire became the first Fairtrade Town in the world in April 2000.

The scheme acknowledges the effect of 'people power', and the Fairtrade Foundation states:

Fairtrade is about bringing the farmer and the shopper closer together. It's about putting people at the heart of trade. Becoming a Fairtrade Town sends a powerful message about how your community wants trade to work and will directly benefit some of the world's poorest farmers and workers through increasing awareness and sales of Fairtrade in your area.

Each town has to meet five goals in order to be awarded the status, and the support and involvement of the community is essential:

The choices each of us makes every day can make things better or worse for the people struggling to produce food and other goods across the world, and for our entire planet. Lent is a good time to look at how we can make better choices, and to begin making even small changes towards achieving the world we want.

Visit the Fairtrade Foundation's website on the link below.