Fifth Sunday of Lent: It is in living service that we find true glory

Fifth Sunday of Lent: It is in living service that we find true glory 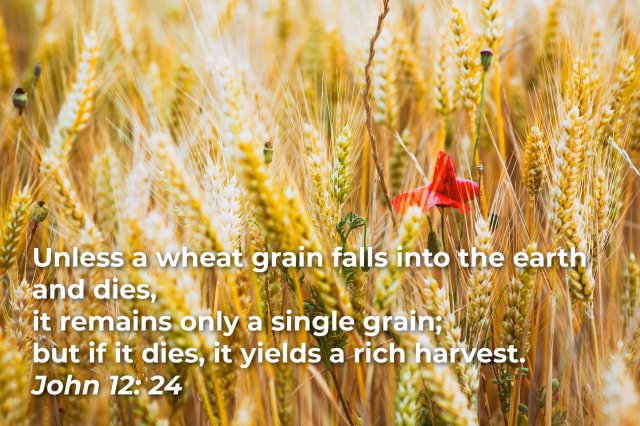 Reflecting on the gospel for 5th Sunday of Lent (John 12: 20-33) Fr Gerry O'Shaughnessy SDB looks at the difficult concept of the 'glory' of the cross. (Photo: Catalina Fedorova on Unsplash)

I have always found it fascinating that the great Temple of Jerusalem had the 'Courtyard of the Gentiles', where non-Jews were always made welcome and would never be excluded. On one of my visits to pray at the Western Wall, I was very touched when a Jewish teacher invited me, a gentile, into the library situated to the left-hand side. I felt so welcomed into this sacred space and listened as the scholars recited from ancient scrolls—taking part in a tradition that reached way back into history. There was a feeling of acceptance and unity that the world needs more than ever in these pandemic times. This disease has hit the world community and has not shown any favour or discrimination. We are in this together and we can only get out of it together.

In our gospel reading, these Greek gentiles came to Philip, one of the twelve disciples. Philip's name is Greek—perhaps they had heard someone call him, and felt that he would understand them a little bit more. Many times, the Greeks came to Jerusalem, because the Jewish people had a reputation for having the kind of faith that the people of the whole world were looking for at that time. Notice these Greeks want to meet Jesus: we are so lucky, as we do not have to wait to be introduced; we can share the depth of that love with Jesus every single day. Through scripture reflection and healthy Christian living, we all have that opportunity to walk in the light of Christ.

Jesus points to the natural outcome of his ministry: 'now the hour has come for the Son of Man to be glorified'. This is not seen through the kind of power and glory most people would expect, but through service and death: 'unless the grain of wheat falls onto the ground and dies, it remains a SINGLE grain.' Jesus is pointing beyond the ordinary and helping his audience to appreciate—or at least to reflect on—the unthinkable: his own impending death. He is not glorifying death, rather he points to death to show that when the seed dies,'it yields a rich harvest.' Only an evil heart gloried in the death of President Kennedy. Only racist hearts gloried in the death of Martin Luther King. Only wicked hearts could glory in the deaths of terrorist victims; only uncaring hearts can ignore the deaths of children through poverty and malnutrition. The men and women who loved Jesus would see him die on an instrument of torture that the Romans had invented to terrorise their enemies. They would see the Romans take his life, and before that, they would see the Romans take his dignity in a public spectacle that was meant to intimidate anybody with an eye to see, or an ear to hear, or a heart to tremble at state-sponsored terror and the awful suffering it brings. The Romans jammed their crosses into the earth like scarecrows, and every one of them proclaimed to the world, 'Caesar is Lord and don't you ever forget it.'

'The hour has come for the Son of Man to be glorified,' says Jesus, and we imagine the puzzled looks on the faces of Philip and Andrew and those innocent Greeks who had come to see Jesus do a miracle, and instead find a man who talks in riddles about farming. A grain of wheat has to die; then it has to be buried in God's good earth, or else you will not get a harvest. The new grains of living wheat cannot be achieved without a certain amount of death and burial.

We are invited into this cycle of life and death through our Christian family life; each of us can make a difference. As Jesus reminds his audience, 'if a person wants to SERVE me, they must FOLLOW me'—it is through that act of following Jesus that we learn to serve others. It is in this living service that we find true glory; the Messiah-King is born in the poverty of a borrowed stable and will die among criminals, a victim of injustice and human execution.

Glory in the cross of Jesus Christ sounds almost grotesque, but as Jürgen Moltmann wrote:

The symbol of the cross in the church points to the God who was crucified not between two candles on an altar, but between two thieves in the place of the skull, where the outcasts belong, outside the gates of the city … It is a symbol which therefore leads out of the church and out of religious longing into the fellowship of the oppressed and abandoned. On the other hand, it is a symbol which calls the oppressed and godless into the church and through the church into the fellowship of the crucified God.

We may hang crosses prominently in the front of our churches, but the cross can easily become a sanitised symbol that makes few, if any demands on our lives. Jesus, the friend of sinners, will be crucified between his kind of people in a place where all the lights go out from noon to three. In the darkness of pandemic, we cry out to a God who has shared our pain and confusion, a God who fully understands our 'wobbles' and lack of trust. It seems that Jesus wants to share the glory of the cross, and we think this might be a kind of glory we would rather take a pass on—it is just too hard. We would rather let Jesus take care of the dying part, and we would just show up for the resurrection. Maybe we could get some of the new life while still hanging on to our old one; get humility and feel pretty proud of it; get gratitude for God's unconditional love, and also want to restrict the distribution of it. We cannot form God in our own selfish image and likeness.

Do we truly want to embrace unwanted neighbours, let alone serve them in any way? Today is a call to real service that will make a difference. As much as we may preach self-denial, is actually living a self-sacrificing life that puts others' needs before our own is simply too much to ask? The crucifixion of God is a reminder that the cross is the way of Jesus.

There is no Christianity without a crucified Christ and therefore there is no discipleship without picking up our own cross and all the suffering and loss that comes with it.