Meeting Christ outside the Walls

Meeting Christ outside the Walls 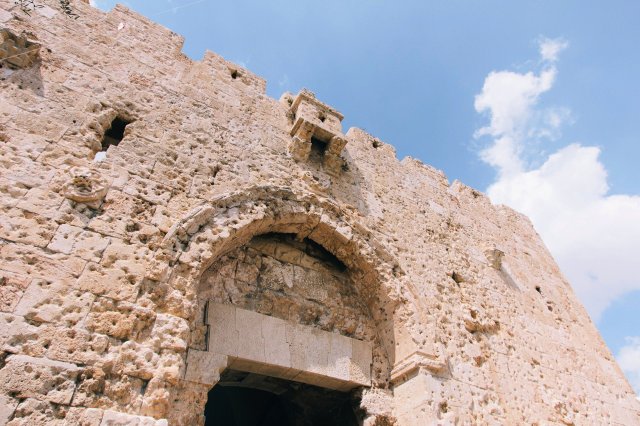 On the threshold of Holy Week, with our thoughts turning to the Crucifixion of Jesus outside the walls of Jerusalem, Catholic teacher and Deacon, Michael Bennett, looks at the symbolism of the city walls in the gospels, and what this means for Catholic education ...

Tantur Ecumenical Institute sits on the very edge of the state of Israel, on the green line that separates Israel from Palestine. It is a Vatican College, which is funded by the University of Notre Dame, America. It was, for a short time, my home in my undergraduate years. I spent a summer immersing myself in theology, scripture, archaeology and philosophy. It was an amazing experience for a twenty-two-year old from North Liverpool. I had the privilege of engaging with learned women and men from all of the main denominations of the Christian tradition, as well as Islamic and Jewish scholars. I gained valuable insight in the history, politics and culture of the Holy Land—when Pope Benedict spoke of the Holy Land as 'the Fifth Gospel', he was right.

Of the many experiences I gained on that study placement, it was mixing with the indigenous Palestinians that touched me most. To visit their homes in Bethlehem, break bread together and share their life stories was a humbling experience. It showed me what life was like for those on the margins of society—for those who now live behind the wall!

Walls are a symbol, a metaphor for many things; if one exists the beyond the wall, one is rarely in a privileged position. If we reflect on the Passion, we can gain a real insight into the symbol of the 'wall'. Jesus was crucified outside of the walls of Jerusalem: stripped bare, marched away and hung to die outside the holy city – reflect on this. Taken outside. Excluded. Removed. Jesus was expelled from the city. Golgotha was not a place of inclusion; those who were taken there were 'dispatched' in the cruellest of ways. Yet, what happened there is the greatest act of inclusion. For not only did Jesus die as the excluded one, beyond the city limits, he revealed himself as the Christ beyond the walls of the city. The resurrection of the 'God-Man' also took place beyond the walls!

What then can we gain from this truth? To me it is quite simple, if we want to meet Christ, we must look beyond the walls. We must seek out the neglected, the rejected, the excluded. This is where we truly meet the Christ. The beauty of Catholic education is that it has traditionally sought out the areas that exist beyond the comfortable and affluent postcodes, built schools there and sent its ministers of education to them to serve the poor. This has always been a genuine act of redemptive love. The redeeming power of education has offered a means of salvation to many a child who would never have escaped the cycle of deprivation without the inclusive love of the Church.

The Church must continue to seek out those who live beyond the walls that society makes, to offer that life-affirming education that allows individuals to live life, and live it to the fullest. Pope Francis recently said:

If we wish to dialogue we do this in the first place with the poor. They are not just another party to be won over, or merely another individual seated at a table of equals.

To me, this is an invitation for us all to move beyond the limits of our own comfort, seek out the most vulnerable and deprived within society and engage with them. As a teacher, it is a call for me to work in areas of socio-economic deprivation and try my best to empower students who face both material and cultural deprivation, so that they can gain the qualifications they need to live life to the full. At a diocesan level, it is a call to be faithful to the foundational mission of education, which was to take education to the poor. This must never be deviated from, as it is at the heart of what Catholic education should be. The importance of the mission to the poor was clearly outlined in the Second Vatican Council, which clearly states:

The Sacred Council of the Church earnestly entreat pastors and all the faithful to spare no sacrifice in helping Catholic schools fulfil their function in a continually more perfect way, and especially in caring for the needs of those who are poor in the goods of this world or who are deprived of the assistance and affection of a family or who are strangers to the gift of faith.

What truth! The Church at every level, local, national and global – the Universal Body of Christ – must never lose sight of its sacred duty to move outside the walls and offer the poor an education.

St Paul in his letter to the Hebrews says:

And so Jesus also suffered outside the city gate to make the people holy through his own blood. Let us, then, go to him outside the camp, bearing the disgrace he bore.

Paul's invitation is clear: we must go beyond the walls and there we will find Christ in those who suffer. As Christians we must 'hate' poverty whilst at the same time embracing those who suffer its effects and offering them the means to break the cycle of deprivation. The 'option for the poor', is not optional! It is vital, so that the Christ stands as the Universal symbol of inclusive love.