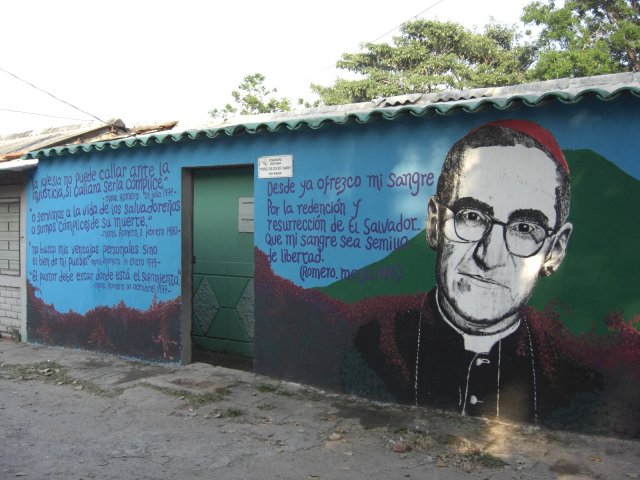 This week we celebrate the feast of St Oscar Romero, assassinated on 24 March 1980. Britney Garcia, a student at St John Bosco College Battersea, wrote an article on St Oscar for the latest edition of Faith Matters, the college magazine produced by students for an adult audience. We reproduce the article, which includes additional reporting by Sophia Najero Ramirez, by kind permission of the editorial team.

Oscar Romero was born on 15th August 1917 to Santos Romero and Guadalupe de Jesús Galdámez in El Salvador. He had five brothers and two sisters. When he was one, he was baptised by Fr Cecilio Morales. Romero was put into a public school and was then privately tutored until he was 13.

During these years, his father taught him carpentry, where he learned to make tables, chairs and doors. Santos wanted him to learn the skills of his trade as it was more likely that he could get a job if he had these skills. Nevertheless, the people around him did not expect him to become a carpenter as they could see his evident devotion to God.

At fourteen, he decided that he would like to become a priest and so, pursuing his dreams, he entered a junior seminary. However, after three months he left due to his mother being ill. He worked in a mine in Potosi with two of his brothers, but only earned 4 pence a day. After he graduated, he joined the national seminary in San Salvador, the capital of El Salvador. He was sent to Rome to study in the Gregorian University. In Rome on 4th April 1942 he was ordained, however, his family were unable to attend his ordination due to the flying restrictions put in place during World War II.

In 1943, he flew back home with a friend, Father Valladares via Cuba, where they were detained for several months in prison, due to the fact that they had come from fascist Italy. Once back in El Salvador, he was assigned to work in Anamoros but later moved to San Miguel where he worked for 40 years. He started an Alcoholics Anonymous group, promoted apostolic groups, helped in the construction of San Miguel Cathedral and showed devotion to Our Lady of Peace. In 1966 he retreated, as he felt exhausted emotionally and physically, and was diagnosed with obsessivecompulsive personality disorder. In this same year he became the Secretary of the Bishops Conference and was also appointed editor of Orientacion magazine where he confirmed his understanding of adhering to traditional Catholic teachings.

Oscar Romero spoke against poverty, social injustice, assassinations, and the war that was raging in El Salvador. He condemned the persecution of members of the Catholic Church that had been assassinated for speaking out against many atrocities taking place across the world. The way that he could spread these messages, apart from celebrating Holy Mass, was through the Catholic radio station where he was able to speak out against torture and murders.

On 23rd March 1980, Romero was celebrating Holy Mass in the chapel at Divine Providence Hospital, where he gave a sermon directing Salvadorian soldiers not to obey the government, to follow their conscience and to stop violating human rights. The next day he was shot dead whilst celebrating Holy Mass. He was buried in the Metropolitan Cathedral of El Salvador and a funeral Mass was celebrated attended by more than 200,000 people.

Over the years, many miracles had been reported to the Congregation for the Causes of Saints [CCS] that could have led to the canonisation of Romero. However, they were not accepted until 31st January 2017 when a case was opened to investigate a miracle of a pregnant woman. The CCS, medical experts and theologians approved it. Afterwards, Pope Francis approved the miracle on 6th March 2018, which led to the canonisation of Oscar Romero on 14th October 2018 celebrated in Saint Peter's Square.

Why do you think Oscar Romero liked to help poor people or people that were in distress?

I didn't meet Oscar Romero personally, however, I met him through the radio at 5pm on Sundays where he would celebrate Mass. The church was always full, not a soul could fit inside and, because of that, I listened to Mass via the radio where he would speak out against the unfairness in the country.

How would you describe his personality?

For me, he was a person who defended our human rights. There was a lot of injustice, many missing people in the country and I took notice of how much he cared for the poor and disadvantaged and how he helped them. I remember people going to Oscar Romero and
seeking help from him to find their sons and husbands. The government would take men and boys away to make them part of the war and Oscar Romero would help those he could. He would go to where they were keeping the men and talk to the guards to release them, and the guards often agreed, but some refused. Oscar Romero would go and sneak them out of where they were being held hostage and get them back to their families. He was the only voice we had, like Salvadoreños bc, we needed someone to defend and protect us from the injustice the government showed in the country. There was a time when he was distraught and angry because of the government. He spoke through God's words about how they didn't have normal human decency and how they murdered people with no emotion but for money.

Did you notice a change in his character after he was diagnosed with OCD and scrupulosity?

I wasn't aware, at the time, that he had been diagnosed with OCD and scrupulosity. That shows how he put his personal needs aside in public to help his country and his people.

What do you think was his biggest contribution to the Catholic Church?

I think Oscar Romero's biggest contribution to the Catholic Church was being there for us and helping everyone he could. He always lived by God's word and always upheld the dignity and respect of those who needed him most.

How did you feel, personally, when you listened to Oscar Romero?

I came to love and respect him because he worked hard and tried his best to look after and defend his country, his people and those who needed his help. Sometimes, when he would have deep conversations, I noticed that God was using him to help us because God knew we needed someone, a voice who could protect us and God used Oscar Romero to speak out for us and to encourage us to have a voice and to speak out.