Setting the World on Fire

Setting the World on Fire 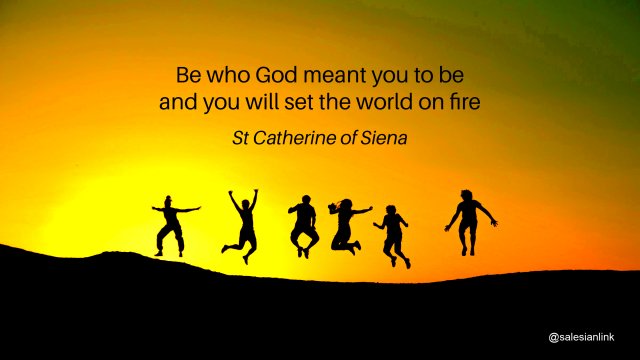 For Catholic teacher and deacon, Michael Bennett, righteous anger at the inequalities faced by so many children fuels the hope and courage educators need to help all children achieve their full potential, and to be the people God made them to be. (Image: adapted from a photo by Timon Studler on Unsplash)

This morning I woke up to these words of wisdom attributed to St Catherine of Siena:

"If you are what you should be, you will set the whole world on fire."

Whenever I see the pain that poverty causes, or the apathy towards education that I have often seen in the poor and those who should embrace education but are often too consumed with survival to fully commit to the educational process, I get angry. When I see some people in education look down upon, even laugh at, schools who are working flat out in areas of deprivation yet still do not gain the recognition they deserve, I get angry. Why? Anger is surely destructive, or at least counterproductive, you may say. My response is: not at all!

St Augustine of Hippo reflects on anger as a form of 'hope'. Yes, you heard me: hope.

Hope has two beautiful daughters; their names are anger and courage.

At the heart of the Salesian charism is optimism—hope. It is a desire to set the world on fire with the hope that education offers. Hope often requires anger. In education, we should be angry that children live in poverty. We should, we really should. Educators should be angry at the unfair playing field that judges leafy, middle-class schools by the same criteria as schools that serve families who face infinitely more barriers to learning. This is righteous anger, and we should not underestimate its power to transform. The anger we face should inspire us to take heart, have courage and build the Kingdom of God through education.

He told them another parable: "The kingdom of heaven is like a mustard seed, which a man took and planted in his field. Though it is the smallest of all seeds, yet when it grows, it is the largest of garden plants and becomes a tree, so that the birds come and perch in its branches.

Educators are the tiny mustard seed that can plant the vision of a better world in the hearts and minds of young people. This is a vision of a just world for all; a world when worth is not decided on the postcode a child is born into or the salary and status of their parents, but on the content of their character and their ability to achieve despite the limits placed upon them. To take up the challenge to build the Kingdom of God through the ministry of education requires courage. Christ himself was clear of this in the Gospel of St Luke 9:23:

Then he said to them all: "Whoever wants to be my disciple must deny themselves and take up their cross daily and follow me".

Teaching requires courage. To walk with young people in their daily lives with all that they encounter in this world is a courageous act. The path is often hazardous; rarely is it easy. Yet it is a path that many follow because they feel a genuine call from the Lord. This is why I have always believed that the ministry of education is a genuine vocation. For me, it was a vocation informed by anger. I was the first in my family to go to university. My father is a bright man, who over time achieved success in industry, yet, as the eldest of ten children from a working-class Catholic ghetto in Liverpool, he was denied the access to education that a person born three miles down the road would have had. I get angry when I see families barely able to make ends meet yet still try their best to give their children all they can. We, like Don Bosco and de la Salle, must be moved to action by the anger we experience in the face of the hardships in which we see many young people living. St John Bosco saw the poverty that confronted many of the children who came to his Oratory, and he must have been angry. This must have filled him with hope and courage for what could be achieved when we translate our anger into the courage to create and build the Kingdom of God. I for one believe that each day, each lesson, each book that is marked or lesson that is planned, is another brick in the building of God's Kingdom.

Catholic education is the pearl of great price (cf. Matt 13:45–46). It is the means by which the Kingdom will be built. Those who pick up their cross and walk with Christ as teachers and ministers will indeed set the world on fire. The most authentic expression of Catholic education is allowing young people to grow and develop into the people that they are called to be. The joy of seeing a pupil years after they have left school and hearing about all they have achieved is one of the greatest blessings bestowed upon any teacher. The command to live life to the full will only be achieved when those in our care are allowed to be all that they can be. When this is the reality, our students will set the world on fire.