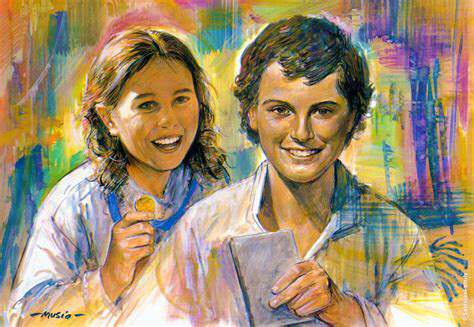 I love this modern painting of two great Salesian saints, Laura Vicuña and Dominic Savio—both were teenagers who can still teach adults so much, especially in these difficult times. I had a copy of this painting in the chaplaincy in Savio Salesian College, Bootle; I remember well when a student pointed up to it and asked me, "is she Dominic's girlfriend?"It made me stop and think; when I was a child, Dominic Savio was presented as an other-worldly paragon of piety that was sickly sweet. You certainly could not imagine young Dominic even looking at girl never mind having a crush! I well remember a playground fight, with two classmates beating seven bells out of each other. Much to our dismay, a teacher broke it up and wanted to get to the root of the problem: "he called me a 'Dominic'" was the simple answer of the boy who felt insulted by this slur and started the fight! It is crazy to think that this young man, offered to other young people as a SAINT of the Church, was viewed as some freak. The blame cannot lie with poor Dominic. Rather, place the blame on poor education that presented Dominic as some 'too good to be true' child offering a sanctity that working class lads in the 1960s could never hope to aspire to. We were taught, by default, that we could never become Saints and we must be content living the 'sinful lives' that pulpits, confessionals and classrooms constantly reminded us of.
Thank God for the insights of Vatican II and a re-discovery of a theology that places humanity in partnership with God. As a result of this great ecumenical council, called by St John XXIII, the rituals of the Tridentine mass were abandoned—as a ten year old altar server, that is how Vatican II impacted on me: no longer the elaborate choreography of serving, as books were moved around, scruple-spoons were positioned and birettas were expertly received into your fingers. As a result of Vatican II, priests started celebrating Mass in the language of the countries in which they lived, and they faced the congregation, not only to be heard and seen but also to signal to worshippers that they were being included because they were a vital component of the service. In such a simple liturgical action, I realised that I could possibly be a priest; when I met the Salesians of Don Bosco on summer camp, my dream became ever more within my reach. Religious life and priesthood was not about perfection, but bringing your own personal brokenness to the Eucharist and sharing it with those you meet in the Camino of life.

Charles and Brigid Savio lived in the Piedmontese village of Riva, where Charles was the local blacksmith. Dominic was their second child of eleven; while lacking much material wealth, Dominic, just like his mentor Don Bosco, lived in a family rich in love and happiness. He was hardworking and very well liked by his peers—this reputation or being a 'goody-goody' is misplaced. My school-based impressions of Dominic were of a rather soppy lad who preferred books to football. The truth was that he was immensely popular among all his peers and was there for them regardless of their class or ability. In school one day, the class bully blamed Dominic for a serious problem in class; without hesitation the teacher lashed out at Dominic who silently took his punishment. Later, the bully admitted that he caused the problem and the teacher spoke to Dominic to apologise. He could not understand why Dominic had silently accepted the blame; his answer is a masterclass for all those who are victims of rumour and lies at the hands of vindictive bullies:

"I knew that the other boy was in trouble for other things. I remembered how Our Lord had been unjustly accused, and I hoped that if I kept silence he would be given another chance.From 'A Brief Life of St Dominic Savio', Paul J Pascucci SDB

Dominic soon met up with Don Bosco and became so excited by the teaching and outreach of this charismatic priest and teacher. Interestingly, Dominic wanted to be a Salesian priest and come to England, no doubt encouraged by the exciting tales of the Rosminian missionary, Fr Lawrence Gastaldi, who regularly preached at the Oratory of St. Francis de Sales. He embraced the lessons that he learnt in the Oratory in Valdocco: Don Bosco truly believed in his young people—he knew that they could be Saints. John Bosco challenged his young people, including Dominic, to become real Saints; not the plaster-cast ones that we still see in our churches today, but living Saints who offer their very best, living life to the full. Don Bosco challenged his young people to find their sanctity not in the extraordinary things of life, but in the ordinary. Dominic did not have to fill his bed with stones or fast from food and fun; Dominic found his sanctity in the ordinary things that made up the life of young people: games, laughter, friendship, listening and showing appreciation. Don Bosco believed in peer-to-peer ministry—something that we see today in restorative justice, for example, and seen in our own Salesian programmes such as Savio House and the Sisters' URSpace project, where volunteers share their faith with young people quite close to their own age. Dominic, like us all, had that divine spark of God's love in his life and made sure that the divine light was kept burning brightly.

In this era of pandemic and when millions have died or are on respirators in ICU wards across the world, and with India and other areas in tremendous crisis still, it is interesting to reflect that Dominic is believed to have developed TB—a respiratory disease that was sadly all too common in the nineteenth century. We should remember that in even into the 20th century, childhood death was far from rare. Respiratory diseases were not well understood, and antibiotics were a long way off. Dominic died as a fifteen year old, never living his dream of becoming a Salesian and working with the young people of London. However, in those short fifteen years he was able to pack in so much life, and that is why we honour him today: we thank him for his wisdom, his peer ministry among his friends, his care and his sense of fun. He was not that prissy, out of touch character that I was presented with as a child; Dominic Savio was a real young man with feelings, thoughts and ideals. He stands as a witness to all the young people in our parishes, schools and youth centres in Salesian care today.

So, today, thank God for the 'Dominics' and 'Dominicas' in your life: those young people you meet at home and in your parishes. They have ideals and visions; they need adults to challenge and support them too. I have been so lucky and privileged in ministry to work with so many amazing young people—they have helped me to see God in the ordinary; they have helped me to laugh and supported me when there were tears and problems. Dominic Savio stands as a role model to young and old alike; today, this feast day, is the chance thank God for that amazing Salesian vision that Don Bosco offered and Dominic fully embraced.

My mind goes back to the painting and the question asked by the year nine student, "is she Dominic's girlfriend?" The 'she' in question is Laura Vicuña, born in Chile in 1891—thirty-four years after Dominic's death. Laura was a student in the Salesian Sisters' school in Neuquen, Argentina, taught by the Daughters of Mary Help of Christians; like Dominic, she wanted to embrace the Salesian life fully and become an FMA Sister. She was a victim of abuse in her sad home life and stands today as patron saint of abuse victims. She died in 1904 of TB, also weakened by the years of abuse she had suffered, and was beatified in 1988. There was no way that Laura could have been Dominic's girlfriend, but I like to think that, in Laura, Dominic certainly has a 'friend who is a girl' in heaven with him—they share a vision and wisdom that we need today.As we move forward from this pandemic, we need to really LISTEN to what our young people have to say: their experience of the pandemic must be part of our Church's wisdom as we move forward together. Let us continue to find the extraordinary in the ordinary; like Laura and Dominic, we can all make that difference. Pope Francis offers us his wisdom in talking to young people in Madagascar:

Sometimes it will be tempting to give up hopes and dreams for a meaningful life and for a more just world, especially when you lack the bare necessities to make it from day to day or to pursue your studies, or when you realise that without a job, stability and social justice, your future is blocked ... Jesus calls each person to move forward and to find ways to make a contribution to improving society ... God does not call us by our sins, our errors, our faults, our limits, but by our name; each of us is precious in his eyes.Pope Francis, 7/9/2019