I have never denied the Eucharist to anyone!

I have never denied the Eucharist to anyone! 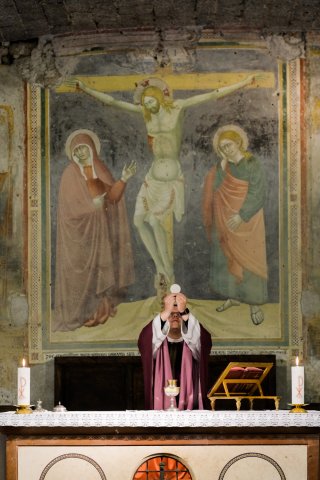 At his traditional post visit press conference on his recent Alitalia flight back home from Slovakia, Pope Francis was quizzed about the Eucharist by American journalists. The election of the Catholic, Joe Biden re-ignited the debate in American politics: how can a Catholic President possibly support the Democratic party's policy of supporting abortion? It has become a hot issue, especially in the fractured and partisan US political landscape. One could argue that the previous Republican incumbent, Mr Trump, did little to ease the horror and pain of abortion during his term. It appeared that American bishops entered the debate in the middle of the 'great lie' about the presidential election that attacked the very notion of democracy and saw the debacle that was the 'January 6th Insurrection'. With the appointment of Mr Biden as the rightful President, some bishops pushed for him, and like-minded politicians, be denied the Eucharist. In his Spring pastoral letter, Archbishop Cardileone of San Francisco made it clear that politicians who did not fight against abortion should be refused communion at the altar. In his seventeen-page letter to his diocese, he singles out abortion as the greatest sin, while others prefer to see abortion in the context of the 'life debate'—the seamless robe put forward by the late Cardinal Bernardin. With this latter view, abortion is placed alongside euthanasia, human trafficking and the equitable distribution of food and resources. All are life issues, as the Holy Father reflected in his encyclical letter, 'Rejoice and be Glad':

Our defence of the innocent unborn, for example, needs to be clear, firm and passionate, for at stake is the dignity of a human life, which is always sacred and demands love for each person, regardless of his or her stage of development. Equally sacred, however, are the lives of the poor, those already born, the destitute, the abandoned and the underprivileged, the vulnerable infirm and elderly exposed to covert euthanasia, the victims of human trafficking, new forms of slavery, and every form of rejection.

In the bitter debate, abortion is singled out as the ultimate act of betrayal of Catholic teaching. Thus, politicians who have supported war, racism and insurrection were free to come to the altar. Were some Catholic bishops adopting an obvious support for former President Trump? Was this campaign against President Biden a symptom of the divisive cancer that was hitting the ordinary lives of US citizens? In a nation that prides itself on strict separation between personal faith and the political discourse, it appears that the Church has become firmly enmeshed. Cordileone wants his parishioners to have a sense of sin and rediscover a sense of worthiness to receive communion. Time and time again in the ministry of Jesus, we see his desire to forgive—even when others want to point the finger and condemn. The Prodigal, embraced in the unconditional love of the Father points the way for a Christian understanding of forgiveness. San Francisco's Archbishop, spiritual leader of Speaker Pelosi is clear in his teaching: public officials must be held to the highest standards. Pastors must not be afraid to correct them and call them to account:

When other avenues are exhausted, the only recourse a pastor has left is the public medicine of temporary exclusion from the Lord's Table. This is a bitter medicine, but the gravity of the evil of abortion can sometimes warrant it. ('Formed in the Womb' 01/05/2021)

There are many in the Church who object to this so-called 'weaponising' the Eucharist. As the Pope has reminded us on so many occasions, Holy Communion is food for the journey of life, and not a merit badge for a job well done. In his interview with 'America' magazine, Bishop McElroy of San Diego refused to adopt the stand of his brother Bishop in San Francisco:

The Eucharist is being weaponized and deployed as a tool in political warfare. This must not happen. (28/04/2021)

The debate rages on, as the UNITED States become more divided—the division of the US Bishops are just a reflection of the painful and destructive partisanship that have become all too obvious. Before we become too self-righteous on this side of the pond, the pain of BREXIT still rumbles on. 'Union' is key to an understanding and full appreciation of the debate. I find it so sad that the sacrament that is the source and summit of our Christian unity, has caused so much pain, hurt and division. As a child I remember joining so many of my fellow parishioners on a Saturday morning to go to confession and receive forgiveness before Sunday Mass—every week! It was drummed into us that we must be 'worthy' to receive Jesus into our lives. The Eucharist must bring us together so that we pray and live the unity that Jesus wanted. Times do change but that does not mean that actions that were wrong when I was queuing up for forgiveness back in the day have suddenly become right. Abortion is a sin against life and, as a Church, we must do all we can to remove those conditions that sometimes force women to terminate pregnancies. The sin of abortion is a cry to society: what are you doing to make your community better, safer and more just? It is one thing to just shout and condemn outside abortion clinics, it is totally different when we offer pastoral care and practical solutions to those seeking refuge in such places.

Perhaps using the theory that 'two wrongs do not make a right', the Holy Father feels that it is wrong to deny politicians the Eucharist. Holy Communion is a gift given to each of us by the Lord. As we 'do this in memory of me', the Church looks to the life, teaching and ministry of Jesus for our moral inspiration. As we break the bread and share the cup of blessings, this sacrament becomes the living sign of Christ among us. Under questioning on his Rome-bound flight, Pope Francis shows that Bishops need to be true pastors, not some sort of ecclesiastical 'bouncers' as politicians approach the altar:

If we look at the history of the church, we can see that every time the bishops did not act like shepherds when dealing with a problem, they aligned themselves with political life, on political problems. (15/09/2021)

His is a call for compassion for all—the public humiliation of refusing Eucharist is not in line with this pastoral plea. While not wanting to talk specifically about the Biden case, the Pope did want to reflect on true shepherding. He does not want to minimise the sin of abortion or make it somehow acceptable in our society, but he did remind us of the need to work for life and take the vaccination against Covid-19. I find it sad that those politicians who claim to be pro-life are the same one who are often loud in their refusal to wear masks and urge their constituents not to take the life-saving vaccination. As a Church, we move forward not only in a spirit of union, but also in a spirit of openness. The Pontiff makes it clear that he has never refused anyone the joy and comfort of the Sacrament. In his 'Joy of the Gospel', Pope Francis is unambiguous about the pastoral path of our Church today:

The Church is called to be the house of the Father with doors wide open... Everyone can share in some way in the life of the Church; everyone can be part of the community, nor should the doors of the sacraments be closed for simply any reason. This is especially true of the sacrament which is the door: baptism. The Eucharist, although it is the fullness of sacramental life, is not a prize for the perfect but a powerful medicine and nourishment for the weak. (47)