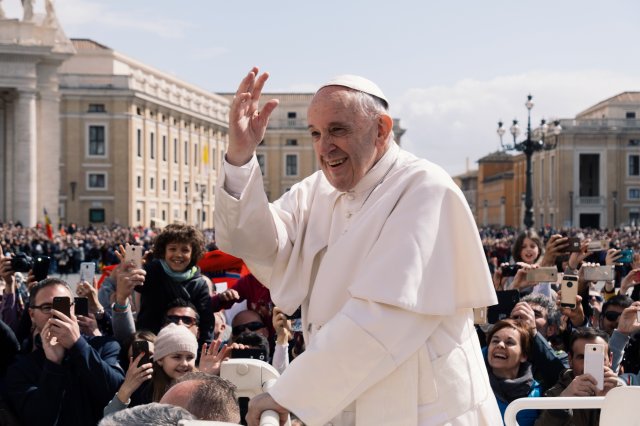 The Holy Father gave his usual interview to journalists on his Aegean Airlines flight home to Rome, after another successful pastoral visit to Cyprus and Greece. As always, the questions ranged far and wide, but one centred on a recent directive from the European Union. Before faithful readers of the 'Daily Express' have mass apoplexy, no, it has nothing to do with the shape of bananas! Rather our friends in Europe have issued a guideline about greetings to be offered at this time of year. Aware the Europe is no longer the monochrome Christian continent of the past, and, perhaps taking their cue from the United States, with its kaleidoscope of nationalities and faith backgrounds and none, the European Commission have suggested we offer each other 'happy holidays' instead of 'merry Christmas'. By concentrating on the feast of Christmas, they claim that we exclude those who do not profess the Christian faith.

While understanding where the Commission is coming from, and praising their desire to be inclusive, we cannot ignore two thousand years of tradition, especially in Europe. While many in the Southern Hemisphere might enjoy Christmas lunch on the beach, soaking in the hot sun, Europeans celebrate around roaring fires, keeping the snow, winds and cold at bay. It is interesting to note that most European cultures transformed their pre-Christian celebrations of midwinter into the feast we now know as the mass celebrating the birth of the Messiah. It made sense for missionaries like Patrick to use these existing pagan festivals: like many before and since, he transformed this special holiday into Christmas.

The reporter who asked about the EU statement did so in the context of the Church promoting unity. We do well to remember that the Holy Father was visiting the centre of the first Christian schism. Pope Francis apologised for any scandal caused by Catholics through arrogance or refusing to care. He made it clear that we need to learn from the Orthodox Church, especially in their desire to involve all in Church governance—they use the method of 'syn hodos' or 'walking together'. Every Catholic diocese have been invited by the Pope to join this synod process, especially as we emerge, very slowly, from the pain of Covid-19. If your parish is not promoting the Synod, you have every right to ask why. As a Church we are being asked to move away from the hierarchical structure that promotes the view that your parish priest knows best. We are invited to become more aware of the need for collaboration—we are not passive consumers of the sacraments. We are called to share the beauty and strength of the Gospel and live it in our daily lives.

It is in this spirit of unity that Pope Francis comments on the EU suggestion. The obvious fact is that Christmas is a reality and central to our Western psyche—we cannot whitewash 2000 years of history. In many ways this desire of the EU to promote inclusivity, has backfired spectacularly. In his answer, the Pope reminded his audience of Napoleon and Hitler who tried to get rid of Christmas. Dictatorships, fascist or communist, could never dim the light of Christ. He reminded us all of the idealism that prompted the foundation of the Union after the Second Great War. The Treaty of Rome recognised the sovereignty of each state and never envisioned a 'United States of Europe', as he said:

Only recently I was visiting a small corner shop in a desire to 'shop local', trying to support small businesses who have suffered in these times. I had a friendly and helpful chat with the owner, Aziz. He is a Muslim, regularly attending one of the local mosques for Friday prayer. On leaving he thanked me for shopping with him and wished me 'a very happy Christmas!' Now if Aziz has no problem in using this traditional greeting, then why do some bureaucrats want to replace it with a greeting that could apply to any celebration? We are not the USA where the 'holiday' has become synonymous with 'Christmas'. I still want to take my 'holiday' in the summer and get away from it all. So never be afraid of wishing each other a 'very happy/merry Christmas'. Enjoy the time you may have away from work and please do make it a good holiday for all you meet. I pray the prayer of one of my great heroes, Cardinal Martini of Milan for the continent we share:

Watch over these peoples, evangelized by Peter and Paul,
by the prophets, by the monks, by the saints;
watch over these regions watered by the blood of the martyrs
and touched by the voice of the Reformers.
Watch over the peoples united by so many ties
but also divided, over time, by hatred and war.
Help us working for a Europe of the Spirit
founded not only on economic agreements,
but also on human and eternal values.
A Europe capable of ethnic and ecumenical reconciliations,
ready to welcome the stranger, respectful of each person's dignity.
Grant that we assume our duty with hope
to inspire and promote an understanding among peoples
which ensures in all the continents,
justice and bread, freedom and peace.
May you have a blessed and happy Christmas holiday.