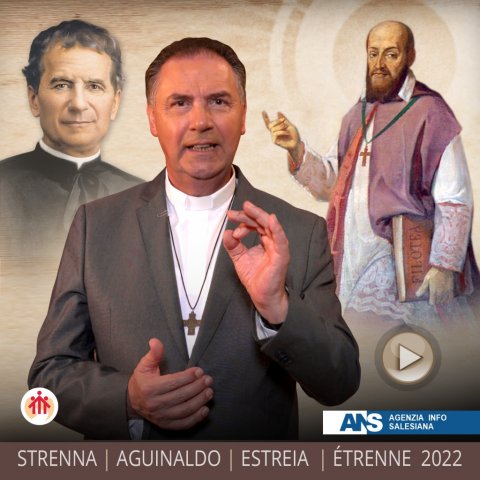 (ANS - Rome) - After the official preview presentation to the Daughters of Mary Help of Christians last December 27, and after the interview the following day in which the Rector Major illustrated the message of the Strenna for 2022, on the theme, "Do all through love, nothing through constraint," the video of the Strenna is finally being officially released and accessible to all.

The video, lasting about 20 minutes, starts from Annecy, the land of St. Francis de Sales, to present the origins of the "saint of loving-kindness". And immediately the Rector Major, Fr Ángel Fernández Artime, captures the first common traits between Francis de Sales and John Bosco: both Savoyards, both with a special bond with their mothers, the first educators of the faith, but above all both passionate about God and the human being.

Thus, despite the differences in wealth - the former was born in a castle, the latter in a dilapidated country house - the spirit that matured from Francesco de Sales reached Turin, John Bosco, and then the entire world.

The video clearly recalls how Don Bosco always showed himself to be indebted to the bishop of Geneva; he admired his patience and kindness put at the service of others; the sensitivity and acumen he used in the mission as spiritual director; charity towards one's neighbor as the measure and cipher of prayer and of one's relationship with God; and in fact he collected some fundamental ideas from him for his spirituality.

As Fr Á.F. Artime reminds us, some of the best-known maxims of St. Francis de Sales - "You can all be saints, wherever you are"; "We must flourish where God has planted us"; "Study to make yourself loved" – are today the heritage of the entire Salesian Family, which through Don Bosco drank from this spirituality.

"The motto of the Strenna, do all through love, nothing through constraint, is for us Salesians like a fourth Salesian vow," summarizes the Rector Major.