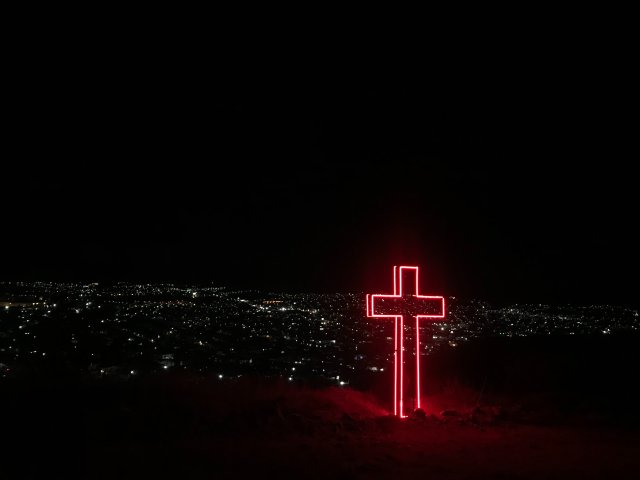 'Hosanna' the crowds cry, as they lay down their palm leaves in the path of the mighty Messiah, as he enters Jerusalem—on a donkey! This simple act shows the true glory of Jesus: not for him a powerful chariot, or a mighty steed. He enters this week of glory on the humble, working farm animal. I suspect that he would have subscribed to the idea that if the donkey was good enough for the pregnant Mary as she journeyed to Bethlehem, then it was good enough for him as this final great week of life begins. Holy Week begins on the note of triumph and glory, as the crowds greet him. However, in a short week that crowd crying 'hosanna' would be the ones demanding that their hated Roman Governor free the murderer, Barabbas, and have Jesus crucified. On riding this beast of burden, Jesus shows his dedication to true service: his mission was always to the poor and needy, and those on the fringes. As we prepare to enter yet another Holy Week, aware of the vestiges of a global pandemic, and the horror of the Ukrainian War, we realise the toll of pain and suffering in our lives. On this Passion Sunday, we can reflect on the birthdays we have missed; the hugs and warm friendships we have had to conduct over social media. These past two years have been like a 'twenty-four month Lent' as we have had to give up so much. For the people of Ukraine the reality of modern warfare entered their lives, as lives were lost and millions were forced into the life of the refugee. Holy Week reveals God's Love that is lavish, limitless, is shown in the events unfolding before our eyes. His passion is outcome of His compassion and his whole life is wonderful witness to God's self-emptying Love. "He did not cling to His equality with God but emptied himself to assume the condition of a slave." Jesus came to serve, not to be served.

Today's liturgy offers us the opportunity to share two gospels. I have such happy memories of the Procession of Psalms that begin our mass today, as we reflect on Luke's version of events (Lk 19:28-40). In Battersea a few years ago, a group of tourists just happened to be passing by as we moved out of Church loudly singing 'hosanna.' They were enthralled by the liturgical drama being played out in a quiet London street. As a result of the witness of the congregation, those tourists stayed for the whole of our mass. At the usual bunfight afterwards, they commented on the beauty of the words, music and action. As they left for the Tower of London, ensuring that their palm crosses were safely placed into their backpacks, they thanked us for this positive experience of religion, sharing with a faith-filled community. We never know the good we do through such a simple witness. Lives can be transformed.

As is the tradition, this year we will read the Passion of Jesus, written by Luke (Lk 22:14-23:56). Even in the depths of this recollection of suffering, pain and death, we see Luke's hallmark vision of compassion shining through. I am reminded of the vision of the prophet, Habakkuk who can see the hand and heart of God in the most horrendous situations:

Though the fig tree does not bud
and there are no grapes on the vines,
though the olive crop fails
and the fields produce no food,
though there are no sheep in the pen
and no cattle in the stalls,
Yet I will rejoice in the Lord,
I will be joyful in God my Saviour. (Hab 3:17-18)

You might remember when panic hit the national psyche two years ago: people were going into shops and supermarkets thinking it was Christmas Eve! Shelves were emptied of everything as Britain went into hoarding mode—even crucial NHS workers found that they could not get a loaf of bread when they came off shift. However, in the midst of global pandemic, 'Armageddon' did not happen. In the wickedness of Russian aggression in Ukraine, we had to make strong ethical choices. The economic blockade of the Russian Federation is hard for the majority of honest and good Russian citizens, it is hard for us too, as we pay eye-watering fuel and electricity bills. In the midst of global catastrophe, supplies were maintained, and shops remained open and we were fed and nourished in the local corner shop or supermarket—at least in the developed world. For months we were still cared for even though we could not go down the pub for a pint or pop into a McDonald's. We are living in a more tolerant age, I think: have you noticed those warmer smiles and the simple thank you's as we move out of the way to give people space? It would be lovely to think that this could continue into the new normal. We had to learn new ways to shop, using one-way systems; we had to be more polite and wait until it was our turn to move; we discovered a new choreography of movement as we gave each other two metres of space—or two shopping trolleys for those of us raised in imperial measurement! Shops have been our lifeline in these days, and I have been encouraged and helped by those shop workers who have greeted us with a smile and warmth throughout. They have been true stars and an example to us all: we did not starve, and shelves were not empty.

In Luke's passion account we see the failure of the apostles who abandoned their Christ in his hour of greatest need. We hear of the wickedness of the religious leaders who plotted with the foreign army of occupation to have Jesus killed. More importantly, however, we read of the bravery and courage of Jesus. In the darkest of Good Fridays, His goodness and integrity shines through. He shows us that there is no 'greater love than to lay down your life for your friends.' We see Jesus reaching out to the repentant thief—we see that promise of unconditional forgiveness that is displayed in Luke's great story of the Prodigal. In the midst of all this violence, we hear, again, those powerful words: 'Father forgive them for they do not know what they do!' That cry must echo around the world today, but especially in Kyiv and in the Kremlin.

It is in that total love, shown vividly on Calvary Hill, that we see the power of love in our own lives. At the start of his ministry, Jesus did not stand on the side of the River Jordan as John offered the baptism of true repentance. As one like us in all things, but sin, Jesus entered the waters, and began that ministry of total involvement. Many of us have to pay the price of that faithful Christian involvement. In self-giving, we open ourselves to manipulation and hurt. The great author, C.S. Lewis helps us to understand the cost of true love—if we never want to be hurt or damaged, then it might be best to lock our feelings and concerns deep within our being, and never reveal our true selves:

Love anything and your heart will be wrung and possibly broken. If you want to make sure of keeping it intact you must give it to no one, not even an animal. Wrap it carefully round with hobbies and little luxuries; avoid all entanglements. Lock it up safe in the casket or coffin of your selfishness. But in that casket, safe, dark, motionless, airless, it will change. It will not be broken; it will become unbreakable, impenetrable, irredeemable. To love is to be vulnerable. ('The Four Loves')

It is precisely in his brokenness and vulnerability on the Cross, that we see the extent of His love. As we walk through this Holy Week, I pray that we are all prompted to share our service and hope. May Holy Week 2022 reveal both our glory and vulnerability.