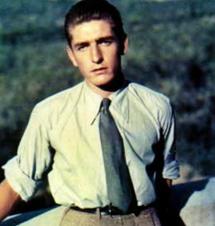 Alberto Marvelli was an inspiring young man, whose life also reminds us that we are called to be involved in the running of our communities, using our voices and skills for the common good - to create fairness and justice in our society.

Alberto Marvelli was born on 21st March 1918, and attended the Salesian Oratory at Rimini. He was a valued catechist and leader, whose strong faith and belief in caring for the poorest and weakest led to his involvement in politics.

During the second world war, he was at first conscripted into the army, but later exempted as his brothers were also serving. He studied for a degree in engineering, graduating in 1942, risked his own life helping the wounded, dying and homeless during air raids, and was part of a group that freed people being sent to the concentration camps, by breaking open sealed train carriages.

After the war, Alberto was closely involved in the reconstruction of his home town. He became a town councillor, opened and volunteered in a soup kitchen for the poor, and started a cooperative for construction workers. St John Paul II called him 'the engineer of charity'.

He was an electoral candidate for the Christian Democrats when, on 5 October 1946, he was killed by an army truck while cycling to the polling station. He was beatified by Pope John Paul II.

His memorial is celebrated on 5 October, the date of his death.