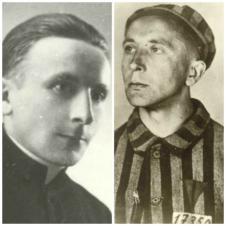 Joseph Kowalski was born in Siedliska near Rzeszów, Poland, on 13 March 1911, into a modest farming family. He attended the Salesian College at Oswiecim (Auschwitz). In 1928, he made his first vows as a Salesian, and received his priestly ordination on 29 May 1938 in Krakow.

During the Nazi occupation of Poland, the Salesians tried to continue with their education and youth work, despite the ban on non-approved programmes, but on 23 May 1941, Joseph was one of twelve Salesians arrested in Krakow by the Gestapo.

He was sent to Auschwitz on 26 June, receiving the number 17,350. In the camp, he did all he could to encourage his fellow prisoners in Block 25, bringing them spiritual comfort and urging their will to survive; secretly administering the sacraments, talking to them about Don Bosco; and at least once, publicly giving absolution to all of the condemned at a mass execution.

He suffered beatings and humiliation for being a Catholic priest, and on 3 July 1942, he was severely beaten and then drowned. He was 31 years old.

In his last letter to his parents, he wrote: 'Do not worry about me; I am in God's hands. I want to assure you that I feel His help at every step. Despite the present situation, I am happy and completely at peace.'

Blessed Joseph was one of the 108 Polish martyrs who died at the hands of the Nazis, beatified on 13th June 1999 by St John Paul II, and we celebrate him on 29th May.