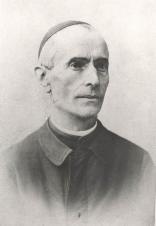 Michael Rua was born on 9th June 1837, the last of nine children. He entered Don Bosco's Oratory in 1852. One day Don Bosco told him: "We two will go halves in everything".

He was among the first few with whom Don Bosco shared the idea of forming the 'Salesian Society'. For 36 years he was Don Bosco's closest collaborator in the development of the Congregation, and accompanied him on his journeys. At the explicit request of Don Bosco, Pope Leo XIII designated him to succeed our Founder and confirmed him as Rector Major in 1888.

Nicknamed "The Living Rule" because of his austere fidelity, Don Rua was also known for his fatherliness and goodness. As the numbers of members and communities increased he sent Salesians all over the world, showing special care for the missionary expeditions. He visited the Salesians in Battersea several times, and supported them closely as they became established there.

He was beatified in 1976 and his memorial is celebrated on 29 October.