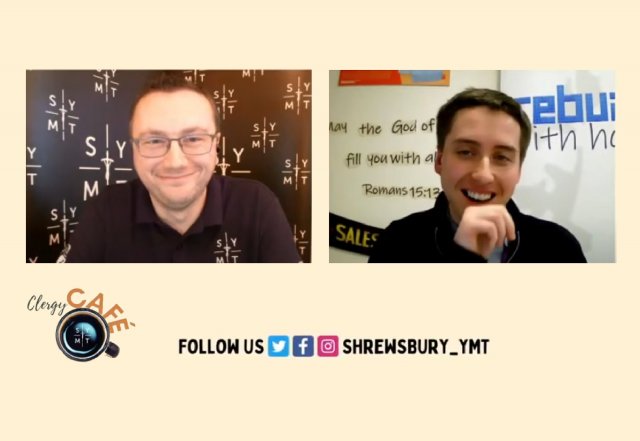 Our own Br Steven Lloyd SDB was the guest on the first video in the new series of Clergy Café, broadcast live on YouTube each Wednesday evening by Shrewsbury Youth Mission Team (SYMT).

Br Ste talked to Sandy Fairley, Director of SYMT, about the Salesian mission and charism, his own vocation and the impact experiences such as his gap year at Savio House and being part of the Relics Pilgrimage had on him.

As an RE teacher and Chaplaincy Lead at Thornleigh Salesian College, Br Ste is at the heart of the issues young people are facing during the pandemic, and he spoke about the steps Thornleigh, like other schools, are taking to make sure they nurture their students and each other and remain a community in these difficult times.

Discussing his formation journey as a Salesian, Br Ste emphasised accompaniment as a vital part of Salesian life, which, just like family life, has its stresses and its ups and downs, but every Salesian knows he always has someone there for him. He said the accompaniment provided by his confreres is also important in helping him find a healthy work-life balance.

Asked about the prayer life of his Salesian community, Br Ste pointed to the centrality of the Eucharist in a Salesian's life, and acknowledged how blessed he feels to be able to have daily eucharist in these pandemic times, and that the community can share this with others online at live-streamed masses. But, in addition to the scheduled times of prayer and practices of piety, he said, 'The biggest prayer that we have as Salesians is around the dinner table. Our life is prayer, so when we sit round the dinner table and we share the ups and downs of our day, that is us praying together as well.'

He described his year as a volunteer at Savio house as 'probably one of the best years of my life so far', with the almost unique experience of living in a community of Salesians and young lay volunteers, which he said 'works because the Salesian spirit is alive there'. (One of the few similar community experiences to this is the Salesian Sisters' URSpace community in Glasgow).

At Savio House, Br Ste said he first experienced the wider context of the Salesians' mission, which he had previously only seen in his Salesian school and parish in Bootle, near Liverpool. The Salesians he had met at church and school impressed him with 'the joy that they had', and he was drawn to them as his vocation developed because 'the Salesians were filled with something that energised me'.

Br Ste said he will make his final vows this summer, and spoke about what it means to him to be about to 'say "yes" to God forever'. While he acknowledged the grave commitment this is, he said 'every day, we are renewing our baptismal promises and saying "yes" to God".

Over the years of his formation, Br Ste said he has been able to see 'being Salesian in different styles', from his novitiate in California to periods spent with communities in Britain, Ireland and other European countries, and this had 'opened my eyes to the fact that we are an international family … we are brothers."

At the end of the interview, which is the first in a series of conversations SYMT is hosting with members of different religious congregations, Br Ste was asked to give a message to the young people of Shrewsbury Diocese.He told them that he understood they are all 'going though a moment of struggle, with your education and with what's happening in the future,' and referred to the theme of this year's Strenna from the Rector Major, saying that with hope, with belief and trust in God, and with patience, 'we will rebuild our lives'. He stressed the importance of looking after themselves, 'Some "me-time" is important for all of us, but particularly for you young guys', he said, before ending by asking them to 'give it a chance; give God a chance."

Watch the full interview with Br Ste on YouTube.

Please keep Br Ste and all of our young men information in your prayers.

If you feel you may be called to become a Salesian of Don Bosco, visit the Salesian Vocations website on the link below.