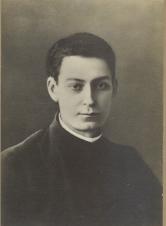 Augustus Czartoryski was born a prince in Paris on 2 August 1858, where his family lived in exile from Poland. He felt God's call to a simpler life, and against the wishes of his family, became a Salesian priest.

'Gucio', as he was called by his family, suffered from poor health from his childhood, and contracted TB from his mother, who died when he was six years old. Despite his fragility, as the only son, the family's hopes of restoration and unity for their land were focused on him.

When he met Don Bosco at his family's home in Paris when he was 25, Augustus realised his vocation was to the Salesians, and he travelled to Turin on retreat as often as he could. Despite his father's opposition to his vocation, Augustus was sure God would show him the way: 'If God wants this, all will be well, since he can remove every obstacle. If he does not want this, then neither do I.'

Although his father did not attend the ordination, he and the family reconciled themselves to his decision shortly afterwards.

Augustus died of tuberculosis in the Salesian house in Alassio on 8th April 1893, a year after he was ordained a priest. A gift he made on entering the Society helped establish the Salesians in Battersea.

At his beatification in 2004, St John Paul II held him up as an example of discernment for young people: 'My dear young friends, learn from Blessed Augustus to ask ardently in prayer for the light of the Holy Spirit and wise guides, so that you may understand the divine plan in your lives'.

His memorial is celebrated on 2 August, the date of his birth.