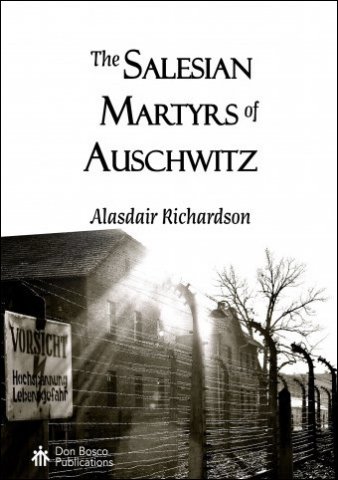 Fr Gerry O'Shaughnessy SDB introduces 'The Salesian Martyrs of Auschwitz', the new book by Holocaust education expert, Dr Alasdair Richardson, published this week by Don Bosco Publications, setting it in the context of the Salesian presence in Poland. The book is available from our online bookshop (link at the end of the article).

Dr Alasdair Richardson's 'The Salesian Martyrs of Auschwitz' is a challenging but important read in the lead-up to Holocaust Memorial Day on January 27. It is a brilliant and accessible account of the Salesian presence in Poland during World War II, and in the tiny town of Oświęcim—a town that was to go down in the history of infamy under its Nazi name AUSCHWITZ. He details the experiences of the twenty-two Salesian priests and brothers sent to the Auschwitz camp, only six of whom survived.

A trip to the medieval town of Krakow nearby just does not prepare you for a visit to Oświęcim. Krakow is simply beautiful; a walk along the river or an exploration the stunning town square or the numerous churches, awakens your senses to the beauty, glory and strength of humanity. An hour-long drive will take you to the place that is synonymous with antisemitism, hatred and the systematic murder of men, women and children. We come face to face with the evil that can disfigure the beauty, glory and strength of humanity.

From the foundation of the Salesian family, Don Bosco was seen to welcome nationalities from across Europe to join his infant congregation. I love the fact that during seminary vacation times, he stood at Turin railway station to welcome Rome-based seminarians, as they changed trains to reach their home destinations. His offer of food and accommodation was gladly taken up by these hungry young men; to the chagrin of their bishops, many of these seminarians left their dioceses to join Don Bosco in his pioneering work for the young.

In Britain, we need to be eternally grateful to Blessed August Czartoryski SDB, a Polish prince who became a Salesian in 1887. Part of his family wealth helped to build the beautiful Church of the Sacred Heart in Battersea; when I lived there, I always said a little prayer of thanksgiving as I looked up at his memorial window in the chapel of St Joseph. Don Bosco also welcomed Bronislaw Markiewicz as he, too, took his first Salesian vows in 1887. He went back to Poland and founded the Michaelite Fathers, dedicated to support disadvantaged and orphaned young people.

The Salesians were officially invited to Poland in 1898 by Bishop Pelczar and took over a former Dominican house in Oświęcim. Like Francis of Assisi, the early band of Salesians, sent by Blessed Michael Rua, the first successor of Don Bosco, set about rebuilding the old church and preparing buildings that could be used as a local high school. From this simple beginning, the Salesian family grew across Poland and continues to make a valuable contribution to the life of the global Salesian family. In our Province, we have reason to be grateful for the positive presence of young Salesians from Poland who have spent valuable formative time with us: their contribution to our schools, youth ministry and parishes has been so important. The Oświęcim school eventually became a trade school and continued operations in training young people throughout the horrors of both World Wars.

Alasdair honestly chronicles the reality of Jewish-Christian relations in a small town like Oświęcim: Catholics were not always tolerant, just as their Jewish neighbours were not always accommodating. The Nazi occupation of Poland in 1939 saw these petty differences magnified into a racist holocaust that led to the murder of millions—mostly Jews, but also others who were deemed 'different' including some Salesians. The little town of Oświęcim was to become the centre of a series of industrialised murder camps with Jews transported from across Europe to face their death.